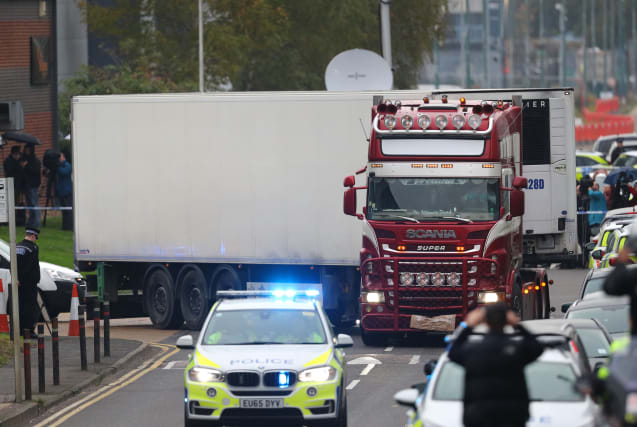 A 40-year-old man facing extradition to the UK on 39 charges of manslaughter relating to the deaths of Vietnamese nationals in a container lorry has been further remanded in custody.

Ronan Hughes, from Silverstream, Tyholland in Co Monaghan, appeared before the High Court in Dublin via videolink.

He faces 39 charges of manslaughter and a charge of conspiracy to assist unlawful immigration in connection with the deaths of 39 migrants found in a refrigerated lorry container in Essex.

Hughes was arrested in Co Monaghan in April by police in the Republic of Ireland in response to a European Arrest Warrant.

A bail hearing in Dublin heard last month that Hughes was “the ringleader and organiser” of the people-smuggling plot.

It is alleged the migrants had been brought into the UK illegally by Mr Hughes and his co-conspirators.

UK authorities say they died on UK territory while being transported from Belgium and have therefore claimed they have jurisdiction to prosecute.

Remy Farrell, senior counsel for Hughes, told the court it is not clear whether the alleged offences took place in the UK.

Mr Farrell said the European Arrest Warrant itself contains a narrative of the offences which are alleged to have occurred in France, Belgium, the UK and Ireland.

“The State seems to adopt the position that an offence is either extra territorial or not, whereas a more nuanced approach is required,” he said.

“It is not a simple cases of defining something as being extra territorial or territorial, it is not an either/or scenario.”

“When you look at the facts, it is clear that there is a trans-national series of alleged crimes that occurred in different countries.”

Mr Kennedy said it was clear from the contents of the arrest warrant, that all the offences occurred within the UK.

Mr Kennedy said the arguments around “extra-territoriality” are a “red herring”, and that Mr Farrell was engaging in “fanciful debate”.

“Mr Farrell’s argument does not even get off the starting blocks,” he added.

“I would invite my friend to not go down rabbit holes as to whether the offences took place on the high seas or on land.

“It is not for this court to engage in parsing and analysing in everything contained in the warrant or say something should be prosecuted in Belgium or in Ireland, especially when the UK authorities said these people died after the trailer entered the territory of the United Kingdom.”

Mr Kennedy said while Hughes’ defence has put emphasis on the alleged offences having occurred in multiple places, it does not mean the offences could be considered extra-territorial.

Last week, Eamon Ronald Harrison, 22, of Mayobridge, Co Down, appeared in court in Dublin and was granted leave to appeal his pending extradition to the UK in May under the terms of the EAW.

He is wanted to face 39 counts of manslaughter and conspiracy to assist unlawful immigration.

The judge fixed June 12 as the date for the full hearing of Hughes extradition case to be heard at the High Court in Dublin.