Gurkhas rescue 109 Britons stranded in Nepal due to coronavirus 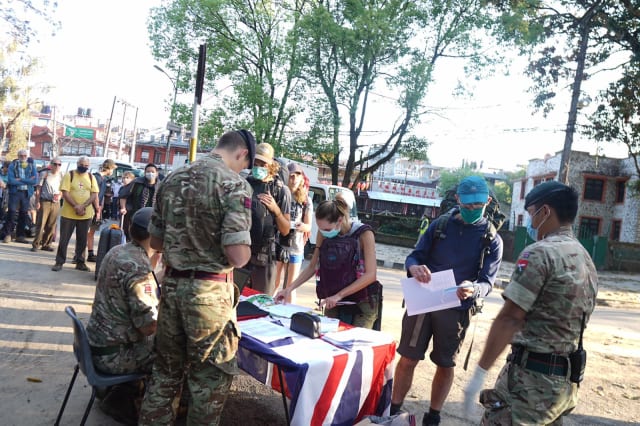 Soldiers from the British Gurkha regiments have rescued over 100 Britons stuck in remote parts of Nepal due to the coronavirus.

A total of 109 British nationals, and 28 foreign nationals, stranded in isolated parts of the country were picked up over three weeks.

Using the local knowledge of British Ghurka networks based in Kathmandu, Pokhara and Dharan, staff at the UK Embassy and soldiers were able to locate the travellers and devise plans to reach them.

With additional support from locally employed drivers, soldiers travelled more than 4,000 miles through the Himalayas to 13 different districts, facing natural hazards such as river crossings and landslides.

Some soldiers and drivers were forced to camp overnight on the side of the road because of the long and hazardous journeys.

Sergeant Prakash Gurung, of 29 Regiment, Royal Logistic Corps, was involved in a mission in Manang, north west Nepal, and drove a single British national over nine hours back to Kathmandu to catch a charter flight.

Sgt Gurung, who has completed three tours of Iraq, as well as serving in Afghanistan, the Middle East, Kenya and Germany, said: “I stepped up to volunteer because I thought it was a part of my job.

“Helping people in dire situations gives me a sense of satisfaction. The gratitude people expressed in messages has encouraged me to do more of this sort of work.”

The Gurkhas are soldiers from Nepal who are recruited into the British army.

Gurkha regiments have served the British crown for over 200 years.

Nicola Pollitt, Britain’s ambassador to Nepal, said: “Getting British nationals home in such an unprecedented time is a huge challenge around the world, but in a country like Nepal, with such extreme conditions, it would have been impossible to get everyone back without the close collaboration of the Embassy and British Gurkhas Nepal.

“We have been able to reunite more than 700 British travellers with their families in the UK, and that would not have been possible without the tireless work of our Embassy and Gurkha team,” she said.

“It is both fitting, and in keeping with the role of the Armed Forces that when called on for assistance that we do our very best to support those in need,” he said.

“We are delighted that we were able to assist the British Embassy, British nationals and our soldiers and families in Nepal through this trying time.”