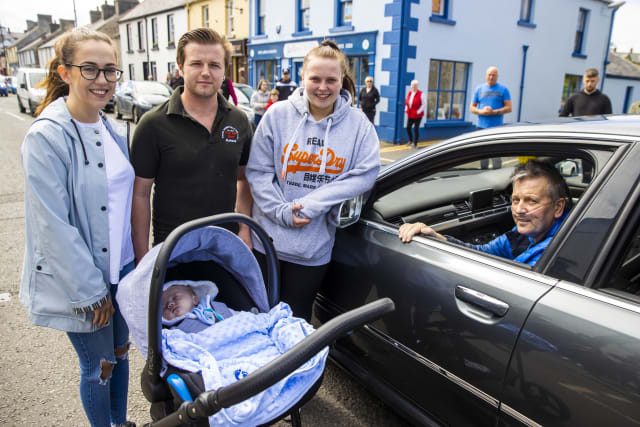 A coronavirus survivor has met his first grandson, born as he battled the virus.

Geoffrey McKillop, 56, was cheered as he left the Causeway Hospital in Coleraine, Co Londonderry, before receiving a hero’s welcome in his native Bushmills.

But the most poignant moment came as the businessman, who at one stage was given just hours to live, caught sight of his first grandson.

Alexander was born four weeks ago, while Mr McKillop was fighting for his life on a ventilator in intensive care.

His family were told that he may have just hours to live.

But Mr McKillop was clapped by medics and his family as he left hospital on Friday.

Bushmills residents lined the streets as he was driven through the town, where he owns the Hip Chip and the Codsway restaurants.

The car paused to allow his daughter Hannah to take her son in a pram to the window for Mr McKillop to see.

Mr McKillop had described looking forward to meeting his grandson as he left the hospital to cheers.

The doctors and nurses who cared for him gathered around the car to wave him off as he left.

Mr McKillop paid tribute to the hospital staff for saving his life, adding: “We shouldn’t lose sight of that, these people saved me.

The businessman was admitted to hospital on April 5 after suffering symptoms at home for 10 days.

He was quickly put on a ventilator, which he remained on for more than two weeks, to April 25.

Staff at the hospital lined the corridors applauding when he was wheeled out of the intensive care unit.

Since then, he has been recovering and slowly regaining his strength.

Mr McKillop is also well known in Bushmills for his previous badminton career which saw him play for Ulster and Ireland.