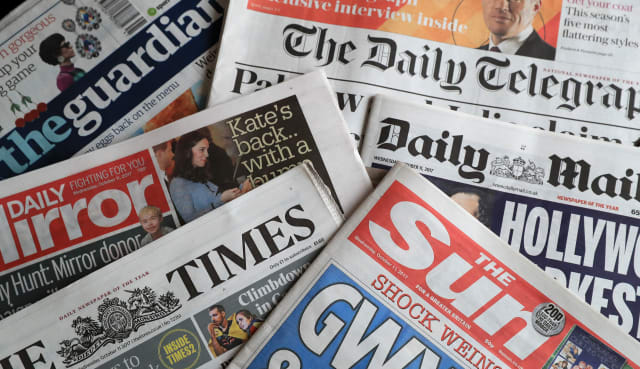 Testing, vaccines and a return to school feature prominently on Friday’s papers.

Metro and the i lead on the new test showing whether someone has already had the the coronavirus.

And the Daily Express says scientists hope to have a vaccine before the summer.

The Times leads on Boris Johnson’s move to target obesity as he accepts it increases the risks associated with Covid-19.

The Daily Mirror says more than 19 million Britons may already have had the coronavirus and recovered.

Meanwhile, a headteachers’ union is rebelling against the Prime Minister’s plan to reopen schools, according to The Independent.

And the Daily Mail takes up the story by saying unions are standing in the way of schoolteachers becoming the next wave of ‘heroes’ of the Covid crisis.

The Daily Telegraph strikes an upbeat tone, reporting there are just 24 new cases of coronavirus per day in London.

The Guardian reports on what it says was a chaotic situation regarding a warehouse stockpile of personal protective equipment.

The Sun says several footballers are investing in guard dogs after England man Dele Alli had a range of high-end watches stolen by “knife raiders”.

The Financial Times reports Nissan has boosted the job prospects of workers in Sunderland with new production plans.

And the Daily Star leads with a Strictly Come Dancing story.