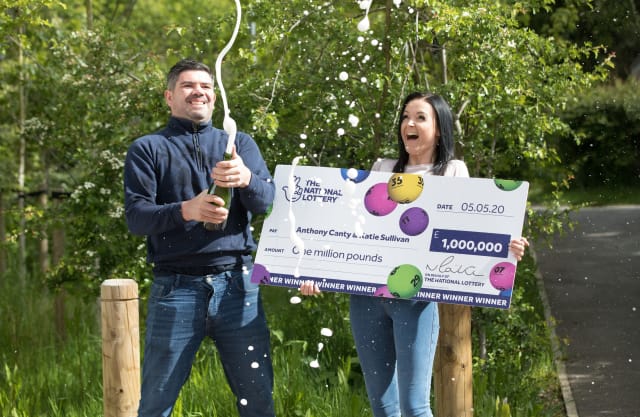 A care home resident celebrated her 107th birthday and a key worker who saved a policeman’s life won the lottery, in Thursday’s news.

The Tottenham Hotspur striker, who enjoyed his first taste of senior football on loan at Orient in 2011, has taken the front-of-shirt sponsorship for Orient’s three kits following approval from the Premier League, English Football League and Football Association.

Kane has donated the sponsorship to three causes, with the home shirt donning a thank you message to the frontline heroes of the coronavirus pandemic, the away shirt showing Haven House Children’s Hospice’s logo and the third kit donated to mental health charity Mind.

The striker, who scored five goals in 18 games for Orient, said: “I was born and brought up only a couple of miles from the stadium and I am really happy to have the opportunity to give back to the club that gave me my first professional start.”

Orient will give 10% of all shirt sales back to Kane’s nominated charities.

One of Scotland’s oldest women, who has lived through two world wars and the Spanish flu outbreak, has not let the coronavirus pandemic hamper her 107th birthday celebrations.

Ellen Gardner, who lives at Orchard Grove Care Home in Glasgow, marked the milestone on Wednesday with a special party that included a DJ and a piper.

The birthday girl had special cakes donated by McGhee’s the Bakers, flowers from Glasgow’s lord provost and banners created by pupils from the Toryglen School hub for key workers.

Even her son Ronnie was able to safely watch his mother open presents and wish her happy birthday from outside the building in the home’s garden area.

A mother has hailed the “overwhelming” response to her urgent appeal for tins of Asda Spaghetti Loops.

Lisa Calder’s 15-year-old son Duncan has Down’s syndrome and a sensory processing disorder, and will only eat the Asda brand of his favourite snack.

Miss Calder issued an appeal for help on social media when she realised she only had two tins of the loops left and all her local stores were out of stock.

Asda has no longer been stocking the loops as suppliers streamline production during the Covid-19 lockdown.

The 34-year-old, from Livingston in West Lothian, said she could not just swap the labels on other tins as the teenager would notice, and will not eat them if they smell or taste different.

David Wilson, a depot manager with Asda in Falkirk, saw the appeal online and set about contacting every store across Scotland to see if any still had the item in stock.

As well as a delivery from Asda, people across the country have been searching their cupboards to send their own tins on to Miss Calder.

She said: “I’ve been overwhelmed by the response. People have been posting tins to me and dropping them on my doorstep… people have been so generous.”

A key worker who helped save the life of a policeman who had a heart attack on the bus during lockdown is celebrating a £1 million lottery win.

Anthony Canty said he told the officer, who has since recovered in hospital, about his EuroMillions win in the May 5 draw.

“He said ‘good karma happens to good people’,” the 33-year-old, from Maldon in Essex, said.

The father of two has worked throughout lockdown as an engineer maintaining the water quality for hospitals and care homes in central London.

On the bus home from Witham train station to Maldon one evening in April, a policeman who had also just finished his shift collapsed.

“We were just on our way home one evening, just talking and he just dropped down… in my lap,” Mr Canty said.

He said he rang the bell to stop the bus and gave the officer CPR with the help of the 999 operator and first aid training he had at work.

The officer was airlifted to hospital and spent five days in intensive care.