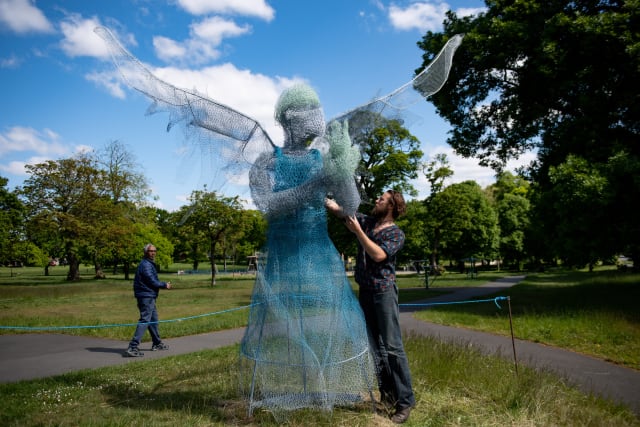 A temporary sculpture of a winged medical worker will hopefully stay on display in a park for several months as a gesture of thanks to NHS staff, its creator has said.

The coronavirus lockdown meant Luke Perry was forced to use materials he already had in his factory, including chicken wire, and design a tribute which could be put in place by two people observing social distancing.

Mr Perry, who worked with Sandwell Council to site the artwork beside the A456 commuter route into Birmingham, said its location was ideal.

The Cradley Heath-based sculptor told the PA news agency: “What I decided to make was a monument essentially to the NHS and care workers.

“So many people in the community – around the whole country, and around the world, want to thank the people that care for them – and this was my way of giving them a voice.

“I am good friends with quite a few people that work within the NHS and the care sector, and in phone calls to them I realised that they were losing friends themselves.

“So, with the materials that we had in the factory – just bare-bones bits of steel and chicken wire and mesh – I came up with this concept.”

Mr Perry said of NHS workers: “I wanted them to see that we are thanking them.

“Everybody is so grateful to the NHS and the care workers, and all of our key workers, and you can see that – there’s people honking all the time as they go up this road.

“People have been taking photos and selfies and all sorts of things – this is part of what people want to be saying – which is ‘thank you’.

“Hopefully it will be here for a few months, until maybe September, when the crisis has calmed down.”