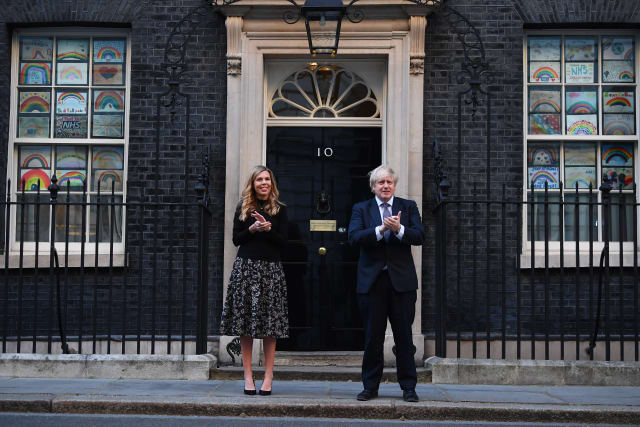 New parents Boris Johnson and Carrie Symonds led the clap for carers and keyworkers this week.

The nation took to the doorstep for the eighth week in a row to clap for NHS carers and key workers who have put their lives at risk fighting Covid-19.

The Prime Minister and his fiancee were seen together for the first time since the birth of their son, Wilfred, at the end of April.

Both have shared their gratitude to NHS staff after Mr Johnson also spent three nights in intensive care with coronavirus.

Their son has been given the middle name Nicholas in tribute to two of the doctors who saved his life.

Labour leader Sir Keir Starmer tweeted: “Another emotional moment as the country comes together to clap for our key workers, our carers and all those keeping our country going through this crisis.”

Thousands of people across the UK joined in the clap, showing appreciation for all keyworkers — from healthcare staff to teachers, doctors and supermarket workers.

Superman actor Dean Cain shared a video message for the staff at the Royal Devon and Exeter NHS Foundation Trust, thanking them for their hard work during the pandemic.

However, SNP health spokeswoman Dr Philippa Whitford told the Commons today “there’s no point in joining the Thursday clap For carers if you’re not willing to protect staff”.