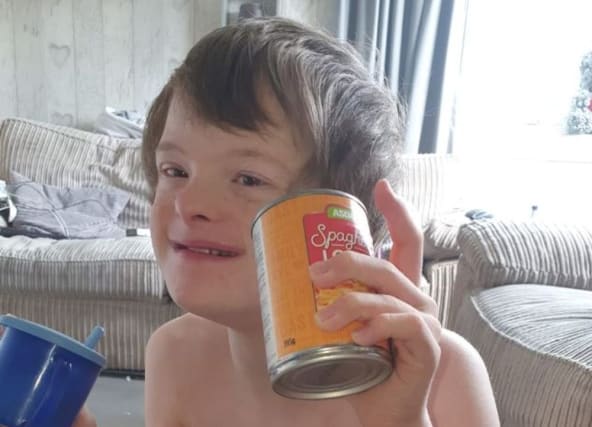 A mother has hailed the “overwhelming” response to her urgent appeal for tins of Asda Spaghetti Loops.

Lisa Calder’s 15-year-old son Duncan has Down’s syndrome and a sensory processing disorder, and will only eat the Asda brand of his favourite snack.

Miss Calder issued an appeal for help on social media when she realised she only had two tins of the loops left and all her local stores were out of stock.

Asda has no longer been stocking the loops as suppliers streamline production during the Covid-19 lockdown.

The 34-year-old, from Livingston in West Lothian, said she could not just swap the labels on other tins as the teenager would notice, and will not eat them if they smell or taste different.

David Wilson, a depot manager with Asda in Falkirk, saw the appeal online and set about contacting every store across Scotland to see if any still had the item in stock.

Mr Wilson said: “Unfortunately our supplier had reduced the number of lines they’re making because of staff shortages caused by Covid-19. This is one of the particular lines they’ve dropped so they’ve stopped making them at this time.

“I then contacted all our Asda stores in Scotland to ask them to have a look in the shop. Asda Arbroath was the only one that had any left.

“I arranged for a driver to deliver them the next day and then one of my warehouse managers, Chris Walls, volunteered to jump in the car and take them himself.”

As well as the delivery from Asda, people across the country have been searching their cupboards to send their own tins on to Miss Calder.

She said of her son: “Medically he is thriving, but he has a very limited diet.”

Thanking everyone for their donations, she added: “I’ve been overwhelmed by the response. People have been posting tins to me and dropping them on my doorstep… people have been so generous.

“Yesterday I received a package from a lady called Liz Armstrong of five big and small tins. I said I’d pay postage as well as the cost of the tins but she didn’t want anything for it.

“People have been so generous. I wasn’t asking for food because I can’t afford it, only because I couldn’t find them anywhere.”

She said she now has enough tins to last several months.