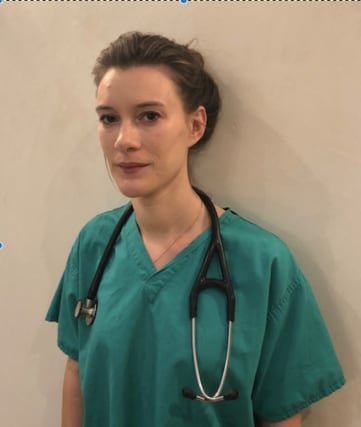 A junior doctor frustrated by shortages of personal protective equipment (PPE) for health and care workers dealing with Covid-19 patients has launched a celebrity charity auction to help raise funds to plug gaps on the frontline.

Katie Sanderson, who was seconded onto a coronavirus ward at London’s Whittington Hospital two months ago, said she was “very distressed by the significant gaps” in PPE and wanted to mine friends and family members’ contacts books to harvest VIP prizes.

Television presenter and comedian Sue Perkins will host the Asks for Masks auction, which goes live at 8.15pm on Thursday, with lots including a dance masterclass with former Strictly Come Dancing professional Kristina Rihanoff, a 1982 World Cup England football shirt signed by Kevin Keegan and a private dining experience at London’s Gaucho restaurant.

Dr Sanderson, 32, from London, told the PA news agency: “I have been looking after patients with Covid-19 since March and have been very distressed by the significant gaps that remain in PPE provision, in hospitals but even more so in hospices, GP surgeries, and other community settings including care homes.

“I really hope that the Asks for Masks auction will offer an uplifting and fun way for people to help with this unprecedented problem.”

Dr Sanderson was due to start work at a hospice as Covid-19 tightened its grip on Europe, so took on a temporary frontline role treating the sickest patients at the Whittington instead.

And she described how that experience left a lasting impression on her, with patients of all ages being rushed in for care.

She said: “It was just incredibly difficult at the beginning because it hit so fast and so hard.

“We’ve gained a lot more knowledge and expertise even in the last couple of months, but early on it was very, very challenging.

“I don’t think anybody would say that we knew what the best thing was to do.

“There’s research ongoing, and there’s a lot of sharing of sort of learning and best practice and information … (but) it felt chaotic.”

The Government has faced repeated criticism after frontline workers cited a lack of quality PPE, including on Covid wards in hospitals, across care homes, and in GPs’ surgeries.

And a much-heralded effort to bring in a haul of additional gowns from Turkey, flown in by the RAF, did little to plug the gaps after they were deemed unfit for use.

It triggered two healthcare organisations, Doctor’s Association UK and the Good Law Project, to launch legal action calling for an inquiry into “recurrent and systemic” failures in PPE procurement and supply.

Dr Sanderson said she had “some sympathy” with the Government due to the complexity of dealing with the new virus.

But she added: “I don’t think the response in this regard seems, from where I’m standing, to have been particularly well organised.

“I don’t think the communication has been brilliant.

“And it seems like it should be better by now than it is.”

She added: “I obviously thought long and hard about whether this (the auction) is an appropriate thing to do, to solicit charitable donations from people for this.

“I hope this will help some people who are basically being asked to see patients often who are symptomatic and are not protected knowing that their colleagues have become ill and are dying.

“I’m not claiming this is the solution but I hope it will help some people.”

The charity auction has yielded so many prize donations that a second sale will be held next week.

Perkins, a former Great British Bake Off host, added: “I’m delighted to be helping Katie out, and to be lending my support to this wonderful campaign.

“No one should lack the basic kit they need to be safe in the workplace and, with your help, we can get essential PPE supplies out to those in the community who need them the most.”