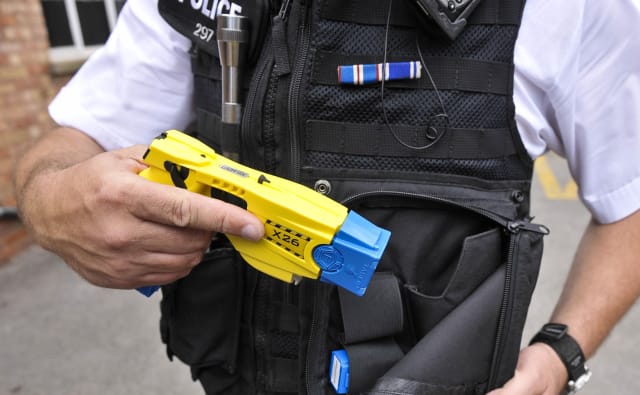 The police watchdog is investigating a series of incidents involving Tasers and has called for “greater scrutiny” of their use by officers.

The news comes as the Independent Office for Police Conduct (IOPC) confirmed it had launched a probe after a man was Tasered by officers and collapsed on the ground in front of his distressed young son.

The body’s director general Michael Lockwood said the decision to look at three more incidents came amid growing concerns about the “disproportionate” use of the weapon against black people and those with mental health problems.

Mr Lockwood said: “The IOPC recognises that the use of Taser is important in helping officers respond to often dangerous and challenging situations.

“However, more officers are now carrying Taser and there are growing concerns both locally and nationally about its disproportionate use against black men and those with mental health issues.

“Robust oversight of cases involving Taser is essential for maintaining public confidence in the police use of this kind of force.

“We need transparency around how and when it is used, and a visible demonstration that police forces are learning from their experiences of using it.”

Mobile phone footage was widely circulated on social media which prompted criticism of the police arrest of Desmond Ziggy Mombeyarara.

The video shows an altercation between Mombeyarara, 34, from Old Trafford, and two officers before the Taser is used, on a garage forecourt in Stretford, south Manchester, on May 6.

He is seen standing next to a marked police car and puts down his crying son moments before he falls to the ground as a Taser is fired by one of the officers.

The boy then becomes hysterical and screams “daddy”.

In court he admitted a string of driving offences but denied two counts of resisting a constable in the execution of their duty. The case has been adjourned until a later date.

Conduct probes have also been launched after a man in his 20s who was Tasered while jumping over a wall in Haringey, north London, on May 4 was left with a life-changing injury.

In a second incident on May 6, a man was stopped in Southwark for a drugs search and was “red dotted” with a Taser.

The IOPC said it was looking at “a matter involving West Midlands Police” but said it was unable to provide further information at present.

Although unable to comment on the ongoing investigations, Mr Lockwood said: “I want to reassure those communities that we take these matters very seriously and will be thorough and impartial in looking at what happened.”

Police and crime commissioners had “an important role in providing community assurance about scrutiny of Taser use”, he said, adding that he remained “concerned that these incidents have caused damage to police and community relations and are impacting on public confidence in police”.

“There must be more research to understand issues of disproportionality as well as assurance and scrutiny of Taser use at a local level – this means oversight, looking at complaints, talking to community members and reviewing this not just when something goes wrong, but 365 days a year,” he continued.

“These incidents have only come to our attention because of the level of injury sustained or via social media.

“Given the number of times Tasers are deployed, there may be other incidents which are not being scrutinised.”

In March the Home Office confirmed it was spending £6.5 million on new stun guns which would allow nearly 8,000 more Tasers to be deployed by police on streets in England and Wales.

Some 41 police forces applied for funding.

The Metropolitan Police were granted 2,380 more of the weapons, West Midlands Police ordered an extra 250 and Greater Manchester Police applied to buy another 100.

At the time Home Secretary Priti Patel said Tasers were a “vital option in dangerous situations” for officers.

Rosalind Comyn, policy and campaigns officer at human rights group Liberty, said: “The mass roll out of these weapons on our streets is dangerous and must be stopped now.”