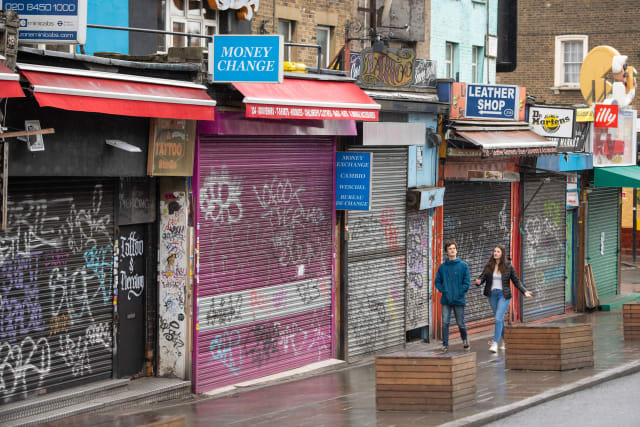 Britain is very sharply moving into recession due to the coronavirus crisis, Bank of England governor Andrew Bailey has said.

Mr Bailey’s comments echoed those of Chancellor Rishi Sunak after new economic figures showed the economy shrank by 5.8% in March and 2% in the first quarter of the year as a whole.

Asked about the data, the bank’s governor told ITV’s Peston: “Well, I think it tends to confirm that we’ve got a very sharp move into recession and it was quite sudden, which is obviously what we’ve all observed from the shutting down of the economy so, to be frank, we’re not really surprised by that number at all.”

Pressed on the debate over whether a new round of austerity would be needed to deal with the economic fall-out of the crisis, Mr Bailey said: “Obviously, it’s not for the Bank of England to comment on fiscal policy.

“What I would say is that I think there are choices, and I think those choices will be looked at very seriously.

“I think one of the reasons that the Bank of England obviously acquiring a much larger stock of government debt than if you go back to the financial crisis of 10 or 12 years ago would have been imagined, is that I think what we can do, providing the overall credibility of the framework remains in place, and independence is very important to that point, is that we can help to spread over time the cost of this thing to society.

“And that to me is important. We have choices there and we need to exercise those choices.”

Mr Bailey warned about the impact of a second spike of the disease.

Asked if he felt the costs of the lockdown were worth paying compared with the potential second peak in infections, the Bank governor said: “I do think that they are right to be cautious on this front from an economic point of view.

“Now, of course, let me be clear and I’m not remotely near to being an epidemiologist so I listen and watch and absorb what’s said, none of us can tell what’s going to happen as this gradual lifting of restrictions is going to happen.

“But I think were there to be a substantial second wave, it would damage public confidence and it would then obviously rebound back into the economy. So, the Government is right in my view to be duly cautious about that part.”

Mr Sunak said it was “very likely” the UK is facing a “significant recession”.

He told the BBC: “A recession is defined technically as two quarters of decline in GDP.

“We’ve seen one here with only a few days of impact from the virus, so it is now very likely that the UK economy will face a significant recession this year and we are in the middle of that as we speak.”