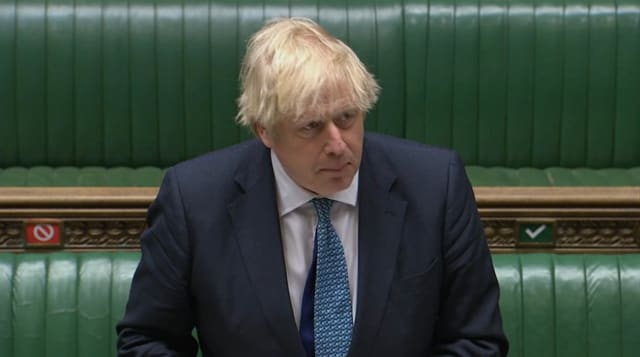 Boris Johnson announced a £600 million package for coronavirus infection control in English care homes as he admitted that the number of deaths among residents has been “too high”.

The Prime Minister insisted the number of outbreaks and fatalities in care homes is now “well down”, as he sought to defend his handling of the crisis.

Figures released on Tuesday suggested that care home deaths accounted for some 40% of coronavirus-related fatalities registered in England and Wales in the week ending May 1.

Mr Johnson, responding during PMQs in the Commons, replied: “No, it wasn’t true that the advice said that, and actually we brought the lockdown in care homes ahead of the general lockdown.”

He added: “And a huge exercise in testing is going on – a further £600 million, I can announce today, for infection control in care homes.

“And, yes, it is absolutely true that the number of casualties has been too high, but I can tell the House, as I told (Sir Keir) last week and indeed this week, the number of outbreaks is down and the number of fatalities in care homes is now well down.”

Following the exchange, Sir Keir wrote to the Prime Minister, asking him to “correct the record” in the Commons.

Analysis of official figures suggests there have been more than 40,000 coronavirus-related deaths in the UK in total.

Mr Johnson said it had been an “appalling epidemic” and that the final death toll would be “stark” and “deeply horrifying” as he sought to explain why the Government has stopped publishing international comparisons at the daily Downing Street press briefing.

He told Sir Keir that such comparisons are “premature” because “the correct and final way of making these comparisons will be when we have all the excess death totals for all the relevant countries”.

“We do not yet have that data. I’m not going to try to pretend to the House that the figures, when they are finally confirmed, are anything other than stark and deeply, deeply horrifying. This has been an appalling epidemic.

The Commons clash came as ministers defended the easing of lockdown restrictions in England amid signs of confusion and anger over the new rules.

– The UK economy contracted at the fastest pace on record in March as the coronavirus crisis puts Britain on the brink of the worst recession in 300 years.

– Police have been told they have no powers to enforce two-metre social distancing in England in fresh guidelines issued by the College of Policing and the National Police Chiefs’ Council.

– Holiday giant Tui is looking to cut up to 8,000 roles worldwide with the firm calling Covid-19 the “greatest crisis” the industry has faced.

– A 14-year-old boy with no underlying health conditions has died from a Kawasaki-like disease linked to coronavirus.

– Mr Johnson paid tribute to Belly Mujinga, a railway ticket office worker who died with coronavirus after being spat at while on duty, saying: “The fact that she was abused for doing her job is utterly appalling.”

They will also be able to meet one other person from another household in a public space, as long as the two-metre rule is respected, while golf clubs, tennis courts and angling have also been given the green light.

Mr Shapps said the Government is adopting a cautious approach – and that restrictions will be reimposed if the transmission rate of the disease picks up again.

“We must understand, we have done so well in the last eight weeks we cannot throw that all away, and so these are baby steps,” he told BBC Breakfast.

“Somewhere there has to be a line drawn where we say ‘This is OK, but this isn’t’, in order to gradually release things. And this is where that line is at the moment.”