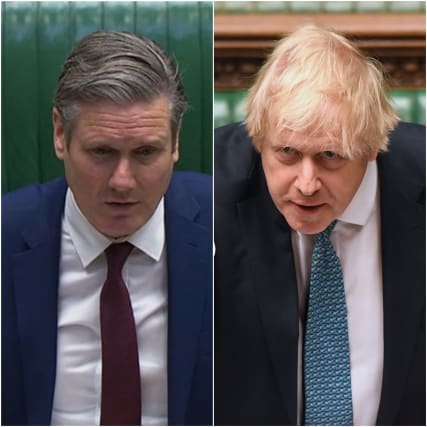 Boris Johnson has accused Sir Keir Starmer of “selectively and misleadingly” quoting from official guidance which said in March that it was “very unlikely” care home residents would become infected with Covid-19.

The Prime Minister and Labour leader clashed over the issue at PMQs in the Commons on Wednesday, during which Mr Johnson admitted that the number of deaths in the sector had been “too high”.

Figures released this week suggested that care home deaths accounted for some 40% of coronavirus-related fatalities registered in England and Wales in the week ending May 1.

Sir Keir told MPs the Government had been “too slow to protect people in care homes” and referred to official advice in place until March 12, which said it was “very unlikely” that those receiving care in a care home or the community will become infected.

Mr Johnson replied: “No, it wasn’t true that the advice said that, and actually we brought the lockdown in care homes ahead of the general lockdown.”

The Labour leader then sent a letter to the PM asking him to “correct the record” in the Commons and to “recognise that this was official Government guidance regarding care homes”.

In his reply, Mr Johnson wrote: “I am disappointed that in the House today you chose to quote Public Health England advice selectively and misleadingly, and I stand by my comments.”

The PM pointed to the sentence preceding the one quoted by Sir Keir, which said the guidance was “intended for the current position in the UK where there is currently no transmission of Covid-19 in the community”.

Mr Johnson said the Labour leader “neglected to provide the critical context at the start of the guidance”.

However, by March 12 there had been 31 coronavirus-related deaths in England, including one in a care home, according to Office for National Statistics (ONS) analysis of death registration data.

Earlier that month, on March 5, England’s chief medical officer Professor Chris Whitty told MPs it was “highly likely” there is “community transmission” of coronavirus in the UK.

And on March 10, England’s deputy chief medical officer Dr Jenny Harries said the start of the UK peak of the coronavirus epidemic was expected within the next fortnight.

Analysis of official figures suggests there have been just under 41,000 coronavirus-related deaths in the UK in total.

Mr Johnson said it had been an “appalling epidemic” and that the final death toll would be “stark” and “deeply horrifying” as he sought to explain why the Government has stopped publishing international comparisons at the daily Downing Street press briefing.

He told Sir Keir that such comparisons are “premature” because “the correct and final way of making these comparisons will be when we have all the excess death totals for all the relevant countries”.

He added: “We do not yet have that data.

“I’m not going to try to pretend to the House that the figures, when they are finally confirmed, are anything other than stark and deeply, deeply horrifying.

“This has been an appalling epidemic.

The Commons clash came as ministers defended the easing of lockdown restrictions in England amid signs of confusion and anger over the new rules.

– The UK economy contracted at the fastest pace on record in March as the coronavirus crisis puts Britain on the brink of the worst recession in 300 years.

– Police have been told they have no powers to enforce two-metre social distancing in England in fresh guidelines issued by the College of Policing and the National Police Chiefs’ Council.

– Holiday giant Tui is looking to cut up to 8,000 roles worldwide with the firm calling Covid-19 the “greatest crisis” the industry has faced.

– A 14-year-old boy with no underlying health conditions has died from a Kawasaki-like disease linked to coronavirus.

– Mr Johnson paid tribute to Belly Mujinga, a railway ticket office worker who died with coronavirus after being spat at while on duty, saying: “The fact that she was abused for doing her job is utterly appalling.”

They will also be able to meet one other person from another household in a public space, as long as the two-metre rule is respected, while golf clubs, tennis courts and angling have also been given the green light to open.