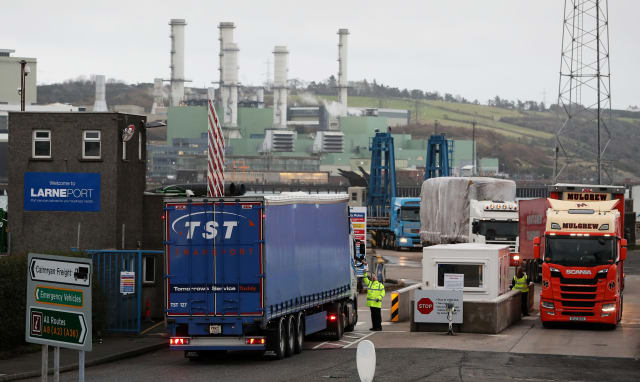 Physical posts are set to be funded at Northern Ireland’s ports ahead of the UK’s exit from the EU, a Stormont committee has been told.

Junior Minister Declan Kearney told the committee that the Executive had been given a briefing by officials on Monday on the latest stage of Brexit negotiations between the UK government and the EU.

He went on to say that the London government has “confirmed that it will urgently put in place detailed plans with the Executive, which does include the physical posts at ports of entry”.

Northern Ireland is set to continue to follow EU single market rules on agricultural and manufactured goods after Brexit, while the rest of the UK will stop following these rules at the end of 2020.

“They have signalled that in order to implement the protocol for January 1 in a way that we all want which is of course is to avoid disruption to trade,” Mr Kearney told the committee.

“Delivery on that infrastructure needs to start as soon as possible, and the British government has indicated that it will provide advice on the requirements and the funding to put that in place.”

Mr Kearney described June as a “pivotal month” for Brexit negotiations, pointing to the end of that month as the deadline to request an extension of the transition period, which is due to conclude at the end of the year.

“There will also be a UK and EU stock take of future relationship negotiations in June which will assess progress after four rounds of negotiations which should have taken place by that point,” he said.

“The third round is taking place this week and there will be a fourth round which will commence on June 4.”

The comments came as the Sinn Fein man along with junior minister Gordon Lyons (DUP) gave evidence to the Executive Office committee following their attendance at a meeting of the Withdrawal Agreement Joint Committee on March 30.

Mr Kearney added that there has been no indication so far that the UK government will seek an extension.

He insisted a decision on transition “needs to be addressed within the next few weeks”, while Mr Lyons said the decision is not one for the Executive Office, but instead for the UK and EU.

Mr Kearney responded: “I don’t think it is conceivable for us not to have that kind of discussion at the Executive given the scale of the challenge which we face.

“This is a scale of economic challenge the like of which we haven’t seen before, and Covid-19 has changed everything for us. Our perspective on Brexit, the withdrawal agreement and the transitional arrangements six months ago has been fundamentally shifted and changed arising from the last period of months as we move through this pandemic.”