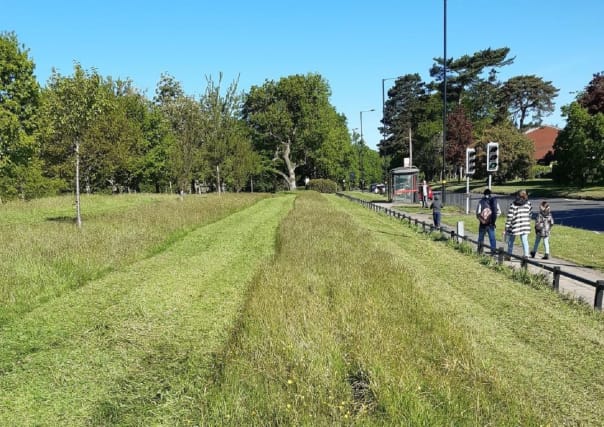 A city’s parks and grasslands will be mowed in wider-than-usual strips to help people maintain social distancing.

More people are expected to head to green spaces after the Government announced an easing of lockdown measures in England, including allowing people to picnic and sunbathe as long as they observed social distancing.

Park crews at England’s largest local authority came up with the idea for the city’s 591 parks and open spaces, after realising the grass had now grown long enough to cut the channels.

Councillor John O’Shea, head of the city council’s parks, said: “A significant number of our parks staff have been diverted onto other street-scene tasks during the early days of the coronavirus crisis.

“This meant that regular grass cutting duties were paused, but now we have reached the point where some of those staff can start returning to some of their regular duties.

“This initially began with grass cutting at key road junctions for safety purposes and now can be extended to other tasks at parks and open spaces.”

He added: “Because the grass has been left to grow for several weeks, it means where the grass is cut there will be a notable difference.

“By cutting these channels, we will be making our parks more usable – and usable in a safer way, where people will have some guidance on how to follow the national guidelines to stay two metres away from people outside of your family.

“The fact that we have 591 parks and open spaces of vastly differing sizes means it is not easy to promote the social distancing message across each and every site, but this is a way of doing something, best utilising the limited resources we have at this challenging time.

“We were already looking at this idea, but now the Prime Minister has made announcements that will inevitably lead to a significant increase in visits to city parks, now is the time to try this out.”