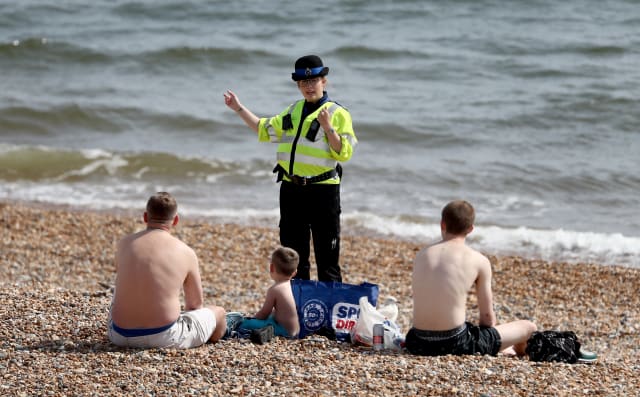 Police have been told they have no powers to enforce two-metre social distancing in England.

Fresh guidelines issued by the College of Policing and the National Police Chiefs’ Council urges officers to only enforce what is written in law, adding that “Government guidance is not enforceable; for example, two-metre distancing, avoiding public transport, or the wearing of face coverings in enclosed spaces”.

The advice, set out in a document published on Wednesday after being sent out to forces on Tuesday night, follows updated legislation coming into force.

Neither the original Health Protection (Coronavirus, Restrictions) (England) Regulations 2020 from March 26 nor the amendment enacted at 12.01am on Wednesday state that keeping two metres apart is a legal requirement.

Published guidance previously issued to forces on how to police the original rules in England did not address whether two-metre social distancing was enforceable.

By contrast, two-metre social distancing “is enforceable” by police officers in Wales, the advice says. But Welsh councils, not police forces, are responsible for making sure there is social distancing in workplaces, it adds.

Referring officers to the updated law in England for more information, the notice reiterates: “People are still not allowed to leave or be outside of their homes without a reasonable excuse.

“The regulations update the list of examples of reasonable excuses, but officers’ judgment and discretion are key – apply the four Es (engage, explain, encourage, enforce).”

The document adds: “Enforcement is a last resort.”

Detailing the extension of the list of reasonable excuses and businesses which are now allowed to open – including trips to garden centres, outdoor sports facilities, open countryside and parks, or to meet one member of another household in public, or take part in house viewings if trying to buy or sell a property – it also sets out clearly that “gatherings of three or more people (from different households) are not permitted”.

Going on holiday, including visiting or staying overnight at a holiday home or second home, and visiting the homes of friends and family (except to protect or care for a vulnerable person), are not considered reasonable excuses, police were told.

Officers were also urged to be aware of differences in legislation in Wales and Scotland, particularly when patrolling towns and villages on the borders and encountering people travelling to outdoor spaces there.

The document said: “Travelling to outdoor spaces in Wales and Scotland for recreation (not exercise) may result in offences being committed in those jurisdictions, and so may not be a reasonable excuse for leaving home.”

Attention was also drawn to the higher fines now imposed in England – £100, reduced to £50 if paid within 14 days and rising to a maximum of £3,200 for subsequent offences.

Human rights campaign group Liberty hit out at the decision to increase fixed penalty notices and claimed confusion caused by unclear messages from the Government are a “recipe for injustice”.

The group’s advocacy director, Clare Collier, said: “This pandemic is a public health crisis – not a criminal justice issue”, describing the latest regulations as a “doubling down on a heavy-handed approach that will undermine public trust and cause lasting harm to people’s lives”.

Paul Griffiths, president of the Police Superintendents’ Association (PSA), said the police service had worked “at pace” to understand the changes and translate them into operational guidance for police officers but it is “crucial” the public understands them too.

He added: “We have engaged regularly with the Government and national colleagues on the impact these changes will have on the public and the police.

“Our key message has been a call for clear and consistent messaging.”