Swan saved after plastic bottle top gets stuck on its beak 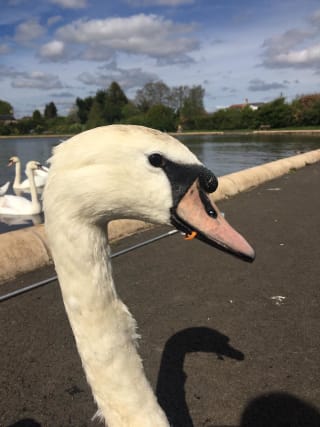 A swan has been rescued after getting plastic litter trapped around its beak.

The Scottish SPCA was notified when a passer-by spotted the bird was in difficulty on the pond in Barshaw Park in Paisley, Renfrewshire.

The swan had a plastic bottle top ring stuck around its lower beak and tongue, which was so tight it was affecting the bird’s ability to eat.

Rescuers caught the swan and cut the ring.

It was then returned to the pond following the incident on May 5.

The Scottish SPCA is warning of the dangers of dropping litter, which can potentially be lethal to wildlife.

Senior animal rescue officer Jan Toraman said: “We are grateful to the passer-by who contacted us.

“If it hadn’t been reported when it was, the swan could have become weak and vulnerable.

“Thankfully, I managed to catch the swan and cut the ring relatively quickly so the swan experienced minimal stress.

“After an examination to make sure there were no other injuries, I released the swan and it happily made its way back to its swan friends.”

She added: “If we hadn’t been on hand to rescue the swan then it would have died as a result of someone leaving this small piece of litter.

“This is a stark reminder to everyone to please dispose of their rubbish responsibly.

“No matter how small, it has the potential to be dangerous or lethal to wildlife. This incident has a happy ending but sadly not all of them do.”

Anyone concerned about the welfare of an animal should contact the Scottish SPCA animal helpline on 03000 999 999.