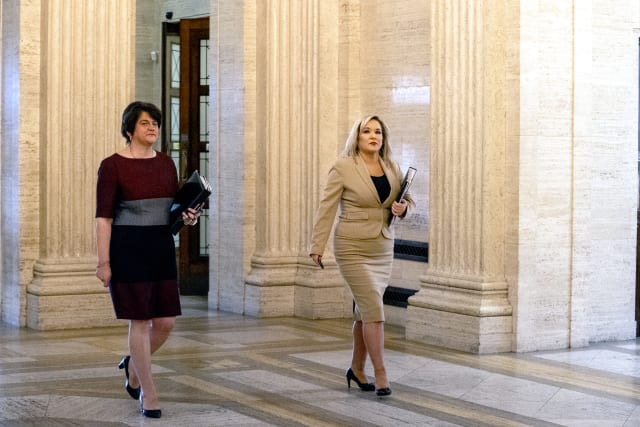 Northern Ireland’s leaders have defended a decision to exclude target dates from the region’s road map out of the coronavirus lockdown.

First Minister Arlene Foster and Deputy First Minister Michelle O’Neill highlighted their determination to be led by the science, not the calendar, as they published their five phase recovery blueprint.

Business owners are among those calling for a timetable, claiming the lack of dates hinders their ability to plan for reopening.

Mrs Foster said the reproduction number (R) of Covid-19 – the number of people an infected person passes the disease to – was the key factor in when Northern Ireland could move from one phase to another.

She said the rate was currently at 0.79 and needed to be driven lower before the region could commence phase one.

“If we could with certainty set dates we would’ve set the dates,” she said.

“But I think what we wanted to do was to make sure that we set out the step-by-step process and then keep the flexibility to be able to move when that R number is at an appropriate place.”

The next review of the current lockdown restrictions imposed by Stormont is due by May 28 but Mrs Foster and Ms O’Neill said they would examine the R rate on a daily basis, and could commence the plan before that date if possible.

However, both insisted that testing and tracing capacities in Northern Ireland had to be improved before phase one was triggered.

Mrs Foster also cautioned that if the R number went above one ministers would have to consider putting the plan into reverse.

She questioned recovery plans published elsewhere that did include timetables, claiming they were so heavily caveated that they were almost meaningless.

“When I look at other documents that have dates attached to them, they’re actually so heavily caveated that one has to ask is it of any use, because actually when they get to that date they may not be able to move forward and then people will be disappointed that they can’t move forward in that way,” said the DUP leader.

Ms O’Neill said a timetable would undermine the powersharing executive’s commitment to be led by the science alone.

“I understand that people want to see that light at the end of the tunnel and we would have much preferred to be able to stand here and say ‘we’re going to do this on a certain date’,” she said.

“But the reality is that we have to be guided by the science, what’s in the best interest to public health.

“So as that R rate comes down, then we get to that position sooner. So the more people comply with the social distancing rules, then we get there sooner.

“I think that actually it’s the right approach to take – the approach of not assigning particular dates to it – because (if you do have dates) then you can’t then stand over the fact that you’re saying you’re being guided by the science.

“But we will get to relief points as quickly as we possibly can based on that R figure.”

The Sinn Fein vice president added: “I am very relaxed about the approach that we’ve taken. I think it’s the right approach that we’ve taken. I know that some people will have wanted to see dates and I understand that we’re all craving a wee bit of certainly right now and also even for the business community people want to plan and they want that certainty the businesses always needs.”

Groups of four to six people who do not share a household will be allowed to meet outdoors while maintaining social distancing in the first step of the blueprint.

Those unable to work from home will be encouraged to return to work on a phased basis in another early shift if the reproductive rate at which the virus is spread continues to decline below one.

Large outdoor-based retailers such as garden centres will also be permitted to reopen in the first step as life edges its way back towards normality.

As well as scientific data, the decision on when to make changes will also be influenced by the NHS’s capacity to cope.

It is anticipated that schools will not reopen to all pupils until the next school year in September.

Drive-through church services will be available and churches will open for private prayer at an early stage in the plan.

Outdoor spaces and public sport amenities will also be included in the first step of reopening.

According to the blueprint, the second step will see groups of 10 being able to meet outdoors, team sports training allowed on a non-contact basis in small groups, the reopening of some libraries and open-air museums, as well as indoor activities involving limited contact of less than 10 minutes and with two to four people.

The third step will see groups of up to 30 being able to gather outside, the reopening of more libraries, as well as museums and galleries, concert and theatre rehearsals resuming and larger indoor gatherings.

The fourth step will see socially distanced church services, the resumption of competitive sport behind closed doors or with a limited number of spectators, leisure centres reopening and outdoor concerts resuming on a restricted basis.