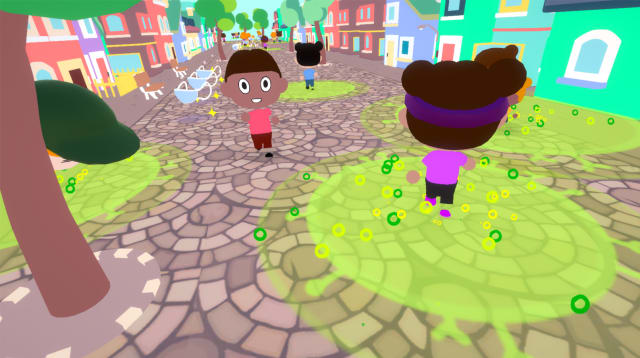 A game has been developed for children during the coronavirus pandemic which aims to demonstrate the importance of social distancing.

Can You Save the World? has already been played 10,000 times since launching as a free online game on computers and now its creators are looking into the possibility of making it available on mobile devices as well.

The game tasks players with dodging people they encounter as they walk along the street, while collecting face masks, food and even toilet roll to help them along the way.

Richard Wiseman, professor of the public understanding of psychology at the University of Hertfordshire, came up with the idea after going outside and feeling like he was experiencing a “live computer game”, having to constantly avoid others.

He worked with game developer Martin Jacob to bring the adventure to desktop and laptop screens within two weeks.

“It came from just walking along and thinking, ‘my goodness, I’m trapped in a computer game, let’s try and do that and hopefully it’s kind of educational for kids’,” Professor Wiseman told the PA news agency.

“A lot of parents have been saying this is a fun way of getting the message out to kids, it’s not too scary, it’s a fun thing but still they understand what to do when they go out to the real world.”

The highest score players can reach is seven billion, but so far only one person has managed to reach one billion.

“What I’ve tried to do is lighthearted fun stuff that gets the message over, there’s been a surprisingly large number of studies looking at the effects of what’s called pro-social gaming,” he told PA.

“They all yield positive results and solve happenings, where people are doing something in a game, where you’re helping somebody else – you’re leading them out of a burning building or going around collecting rubbish from the world.

“When you then ask those people are they then engaged in civic duties, like volunteering or donating to charity, you see real behavioural shifts and so that’s the sort of psychology that’s behind this, that when you are in a game and you’re helping the world in this instance and behaving in a certain way and that game is good evidence that affects you in the real world.”

At the moment, Can You Save the World? is only playable on desktop and laptop using the Chrome or Safari web browsers, by visiting: https://martin-jacob.itch.io/can-you-save-the-world.

The pair are currently working out how the game might be made available on mobile devices.

Antibody tests to be rolled out across the country, says Hancock