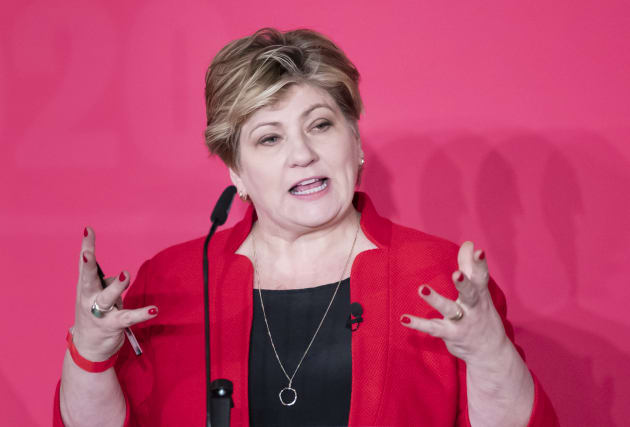 The US may seek to block the UK from negotiating its own trade deal with China, Labour’s Emily Thornberry has warned.

The shadow international trade secretary said the US sees its recent US-Mexico-Canada (USMCA) trade agreement – which followed a renegotiation of the North American Free Trade Agreement (NAFTA) by the Trump administration – as a “template” for future agreements.

The deal effectively blocks the parties negotiating an independent deal with China, as they are not allowed to strike deals with non-open economies, or risk being kicked out of USMCA.

International Trade Secretary Liz Truss said her top priority was to ensure the UK has its “own sovereign capability” in striking future deals.

During international trade questions, Ms Thornberry said: “The Trump administration and the US Congress see the US-Mexico-Canada trade agreement as a template for every other free trade agreement that they are looking to sign around the world.

“Can (Ms Truss) make it clear to them today that she will not agree to any version of Article 32.10 of US Embassy A that would constrain the UK’s ability to negotiate our own trade agreement with China and would therefore represent an unacceptable breach of the sovereignty of this Parliament.”

Ms Truss responded: “I can assure (Ms Thornberry) that when we negotiate with the United States, we will negotiate in the UK’s interest making sure we have full freedom of manoeuvre and we’re making our own sovereign decisions as a country.”

She added: “My number one priority is to make sure that we have our own sovereign capability to trade with the rest of the world as we see fit.”

Later, Ms Truss said the Government is “succeeding” on securing a free trade agreement with the EU and with the rest of the world.

He said: “Our priorities for the last four years were supposed to be in this order. One, securing a free trade agreement with the EU, two, rolling over all existing deals with third countries, three, agreeing free trade deals with the rest of the world.

“Can the Secretary of State explain why has the Government failed on all three?”

Ms Truss replied: “I would argue strongly that we are succeeding on all three of those aims.

Ms Truss said that “protectionism would be a disaster for the global economy” in light of the coronavirus pandemic.

Asked whether she agrees with the World Trade Organisation that “keeping markets open and predictable will be crucial” by the SNP’s David Linden (Glasgow East), Ms Truss said: “I completely agree.”

She added: “He is right that protectionism would be a disaster for the global economy at the moment. That’s why we have been pressing at the WTO to keep trade open and that is why the UK has unilaterally lowered tariffs on key medical goods to keep that trade flowing.”

International trade minister Greg Hands told the Commons that UK businesses will have to increase the “robustness” of their supply chains in the post-Covid landscape.

In response to a question from Labour MP Julie Elliott (Sunderland Central) on international supply chains, Mr Hands said: “One of the important things we will learn from this crisis is the importance of the robustness of supply chains.

“And most focus at the moment is obviously on medical supplies but I think that will extend more broadly.

“We need to make sure that we have diverse sources of supply and that the supply chains that ensue are robust and we have choice and diversity in where we procure our goods from.”