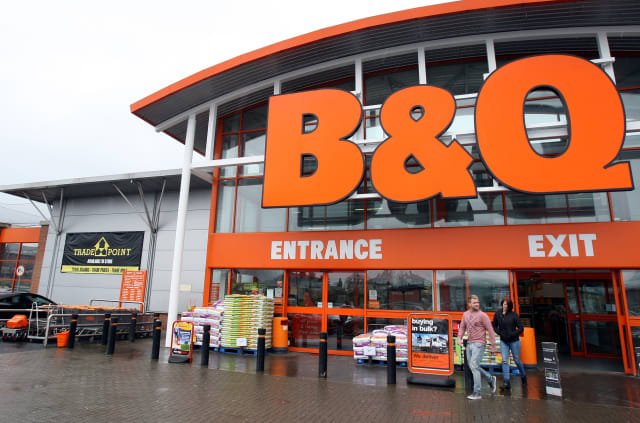 B&Q owner Kingfisher has reported a 21.8% plunge in UK and Ireland sales at the DIY chain due to the coronavirus lockdown, but said sales have started to recover as stores reopen.

Sales across the wider group – including its Castorama and Brico Depot chains in France – were also badly hit by lockdowns in place across Europe, with total sales down by a quarter in the three months to April 30.

Its breakdown of sales revealed the impact of the lockdown on trading, with UK and Ireland like-for-like sales down as much as 70.3% in one week last month.

Sales have begun to improve since the phased reopening of stores in the UK and France in the second half of April, with UK and Ireland sales surging 18.9% in the first week of May.

Group like-for-like sales lifted 2.7% in the first week of May.

DIY shops were allowed to remain open throughout the UK lockdown as they have been deemed essential, but Kingfisher initially closed all its stores, allowing a click and collect and home delivery service only.

Kingfisher said it began a phased reopening since mid-April, with 288 of its 289 B&Q stores in the UK now open, while its 683-strong Screwfix arm is operating on a click-and-collect basis only.

Shares in Kingfisher rose 5% after the first quarter update.

Chief executive Thierry Garnier said: “Having initially closed our stores in France and the UK, we have rapidly adapted how we operate to meet the essential needs of our customers safely during lockdown.

“We started by transforming our operations to meet a material increase in online transactions through our click-and-collect and home delivery services.

“We reconfigured our retail space and processes, allowing a phased and safe reopening of stores whilst preserving the social distancing and other health and safety protocols that are likely to be with us for some time.”

Overall, UK and Ireland like-for-like sales fell 5.7% in March and 43% in April.

Though Screwfix has fared better throughout the lockdown, with sales down by just 4.7% over the first quarter to April 30.

And online sales have rocketed across the group, rising 59% in March and as much as 251.7% in April.

Kingfisher said it furloughed around 50% of total group workforce initially, though it added this is reducing as stores in the UK and France reopen.

It has also slashed costs to offset the crisis, while it is also benefiting from the Government’s business rates relief.