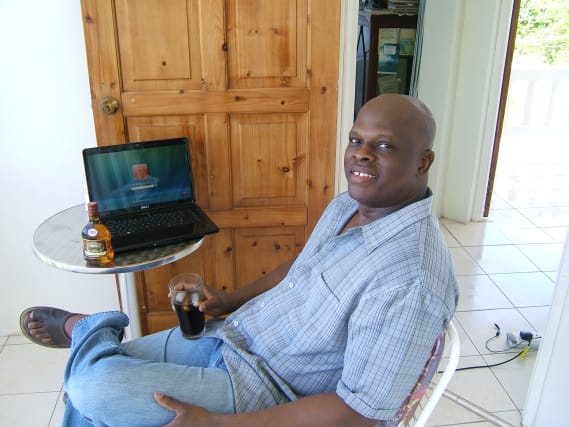 Tributes have poured in for a “superb and generous” science teacher who died after contracting Covid-19.

Dr Douval Thompson-Davis, 59, from Greenford, London, tested positive for the virus while he was in hospital being treated for a muscle tear in his arm.

His cousin, Ade Daramy, 65, a journalist from The Gambia, said the news came as a “red flag” for the family, as Dr Thompson-Davis suffered kidney problems and they knew people with underlying health conditions were susceptible to the illness.

Their worst nightmares were realised when Dr Thompson-Davis died with coronavirus on Monday May 4, nearly a month after being admitted to hospital.

“The family were not allowed in to see him but the hospital staff put the phone to his ear and they sang songs to him and reminisced with him,” Mr Daramy said.

Dr Thompson-Davis was born in Homerton Hospital, London, in 1960 before he and his family moved to Sierra Leone.

He returned to the UK in 1978 and had ambitions to become a doctor, following the footsteps of his mother who had trained as a nurse in London.

But he found his passion in teaching, Mr Daramy said, and later joined Greenford High School as a science teacher 12 years ago.

“He never viewed it with rose-tinted spectacles, he knew it would be difficult at times but he loved the job,” Mr Daramy added.

“He was a committed Christian and I think it was his natural sense of compassion that led him to teaching.

“He was a six-foot-plus bundle of energy,” Mr Daramy said.

“He was a bubbly character and always smiling.”

Greenford High School is collecting sympathy cards on behalf of Dr Thompson-Davis’ family, as well as creating a virtual book of condolence for students and parents to share their memories.

In a tribute published on the school website, headteacher Mia Pye said: “Mr Thompson-Davis was a much loved member of the Greenford High School community; a superb teacher and a kind, generous, endlessly positive person.

“He had an unwavering belief in the ability of all students to succeed and was known by his colleagues as a deeply committed teacher, always available to support any student, at any time, who arrived at his classroom door.

“Mr Thompson-Davis touched the lives of many students and staff during his 12 years at the school and will be immensely missed by us all.”

A GoFundMe campaign was launched by former student Ruth Ladani to raise £1,000 for his family.

The appeal has surpassed the original target and has now reached more than £8,000 with donations from more than 400 people.

Dr Thompson-Davis is survived by his wife Sharon and twin daughters Miah and Savannah, aged 22.