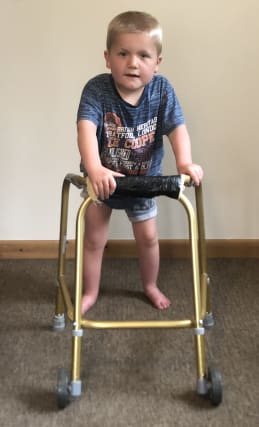 An eight-year-old boy who took his first steps with his new standing walker three months ago is walking laps at home to raise money for the NHS.

Jayden Henderson, from Norfolk, has a neurological condition and hypertonia, a condition which means there is too much muscle tone so arms or legs, for example, are stiff and difficult to move.

His mother Clare Henderson, 37, who is his full-time carer, said she was inspired by Captain Tom Moore’s fundraising efforts.

The Second World War veteran raised more than £32 million for the NHS by walking 100 laps of his garden before his 100th birthday.

Mrs Henderson said she wanted to give something back to NHS staff who have helped Jayden so much.

Their initial target was £500 when the challenge started on May 4.

More than £1,700 had been donated by May 12 and Mrs Henderson hopes Jayden will complete a total of 1.5 miles by the end of the month.

Jayden is doing the walking indoors at his mother’s house in Felthorpe and at his father John Henderson’s home in Worstead.

“As soon as he’s in his walker he’s off,” Mrs Henderson said. “He’s pretty quick when he wants to be.”