We don’t expect a big flood of people back to work, says Johnson 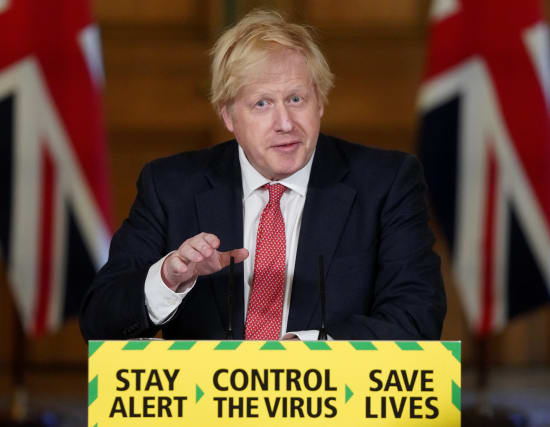 Boris Johnson has played down suggestions there could be a “sudden big flood” of people heading back to work as he set out the Government’s “road map” for easing the coronavirus lockdown.

The Prime Minister said the measures – including encouraging those in England who were unable to work from home to return to their jobs – were “baby steps” as the spread of the virus eased.

However, the devolved administrations in Scotland, Wales and Northern Ireland pointedly refused to follow the lead of the Government at Westminster in dropping the “stay home” message in favour of “stay alert”.

Speaking at the daily No 10 press briefing, Mr Johnson acknowledged ministers were putting forward a more nuanced message, but said he believed the public would use their “common sense” as they entered the next phase.

“Everybody understood roughly what to do in the first phase and it’s by applying common sense that I think we will be successful in this second phase as well,” he said.

He added: “I don’t think any of us expect that tomorrow or for the rest of this week there is going to be a sudden big flood of people back to work.

“I think a lot of people will now start to think whether they fall into that category, whether they could think about going back to work.

“We are taking baby steps. We think that is the right way to do it. We have some leeway now.”

The changes, foreshadowed by the Prime Minister in his broadcast on Sunday, will also see garden centres reopen and people will be allowed outdoors for unlimited exercise in pursuits such as tennis, golf, lawn bowls and basketball.

However, they must keep two metres away from other people and only exercise with their own household.

Mr Johnson said people in England would also be encouraged to wear face coverings in enclosed places, such as in some shops and on public transport.