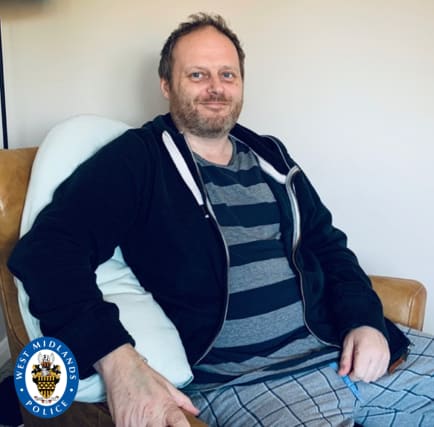 Chief Superintendent Phil Dolby has been tweeting regular updates about his condition, from the first stages of his fight against coronavirus, describing frightening episodes of breathlessness, to now embarking on a “slow and steady” recovery.

The married father-of-three, who was otherwise fit and healthy, was admitted to hospital on March 29 before spending 13 days on a ventilator.

After being discharged, nearly a month later, the serving West Midlands Police officer warned: “I’m 45, I’ve got no real health issues and it nearly killed me.

“My family nearly lost me.”

Calling for people to look after one another, he had earlier said on Twitter: “I am v disturbed by the increasingly blase way ppl are treating the lockdown.”

Repeating that warning while speaking to BBC Breakfast on Monday, he said: “I can’t impress enough just how concerned I am, my family are, I imagine other people in my situation might be.

“To just see – even before what the Prime Minister said, but certainly afterwards – the importance of social distancing and the vigilance we need around our cleanliness and our responsibility to look after each other is still so important.”

Mr Dolby spent 26 days in the Worcestershire Royal Hospital, before he could be discharged.

He has been worried by an apparent relaxation of some people’s attitudes towards the measures imposed to tackle the virus, especially after images emerged on social media at the weekend of people travelling to beaches.

Dorset Police said they had to move sunbathers off Highcliffe Beach, while photos from members of the public showed dozens of cars parked at Lepe Beach in Hampshire.

By contrast, Mr Dolby published a photo – taken from a Zoom call hospital staff arranged so his wife Mary could see him – showing himself in a coma and on a ventilator.

He said: “The reason I put that picture out and did a little bit of work on social media is not to preach to anyone, it’s just a reminder to all of us to please take this seriously.

“When you see queues of cars going to the beach at the weekend, or in parks, it just worries me we’re starting to relax when really nothing’s changed, nothing’s gone away.

“There’s still people dying and we need to remain vigilant.

“My family and I have decided, whatever happens policy-wise – the lack of evidence even from the World Health Organisation around what immunity I may or may not have are really unclear.

“So we’re going to stay shielding in our home, which is tough on the kids but it’s a decision we’ve made as a family.

“I’m just asking for people to remain vigilant and stay in this together.”

Describing his recovery at home, he said the illness had had “a massive impact physically”.

“There’s certainly some mental issues to work through as well, it’s been quite traumatic,” he added.

“But also coming back (home) and understanding for the month, in the end, that I was away from home, what my wife and children went through as well.

He said that while still very ill on a ventilator, his wife had told him to “get better” because her birthday was coming up in a week.

“And on her birthday I started to breathe again, so did as I was told,” he joked.

He described the NHS doctors and nurses who cared for him as “absolute heroes”.

A video of Mr Dolby giving an emotional thank-you speech to all the Worcester hospital staff has been watched more than 80,000 times on Twitter.

As he left the hospital in a wheelchair, Mr Dolby became tearful as he said: “You’ve saved my life and I’m going back to my family.

“That’s a gift I’ll never stop thanking you for.”

Ken Marsh, of the Metropolitan Police Federation, told BBC Radio 4 over the weekend that authorities “needed to be firmer right from the beginning”.