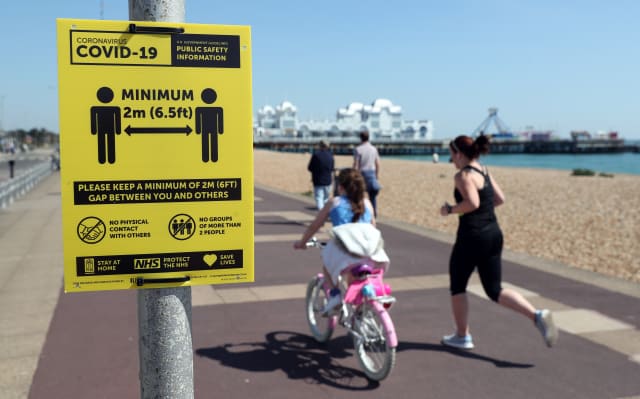 People will be allowed to play tennis and go fishing from Wednesday as the Government eases lockdown restrictions to allow for unlimited outdoor exercise.

The Government’s coronavirus recovery strategy said that from May 13, people will be allowed to exercise “as many times each day as they wish” with one other person from outside their household.

People will also be allowed to drive to parks and other open spaces “irrespective” of how far away they are located.

While recreational activities such as tennis and angling will be permitted, team sports will not be allowed “except with members of your own household”, the strategy, which was published on Monday, said.

Playgrounds, outdoor gyms and “ticketed outdoor leisure venues” – where there is a higher risk of close contact – also remain off-limits under step one of the plans.

The reopening of such leisure facilities may only be “fully possible significantly later” depending on the reduction in infections, it added.

The document warned that if people break the rules and begin to mix in groups in parks, the infection rate could increase and trigger the need for further restrictions.

Under the guidelines, those exercising outdoors must comply with the two-metre (6ft) social distancing rule when around people they do not live with.

People will be allowed to drive to outdoor open spaces as “this does not involve contact with people outside your household”, the Government said.

However, it added: “When travelling to outdoor spaces, it is important that people respect the rules in Scotland, Wales and Northern Ireland and do not travel to different parts of the UK where it would be inconsistent with guidance or regulations issued by the relevant devolved administration.”

According to advice from the scientific advisory group for emergencies (Sage), the risk of infection outdoors is “significantly lower” than inside.

The strategy said: “These measures may come with some risk; it is important that everyone continues to act responsibly, as the large majority have done to date.

“The infection rate will increase if people begin to break these rules and, for example, mix in groups in parks, which will trigger the need for further restrictions.”