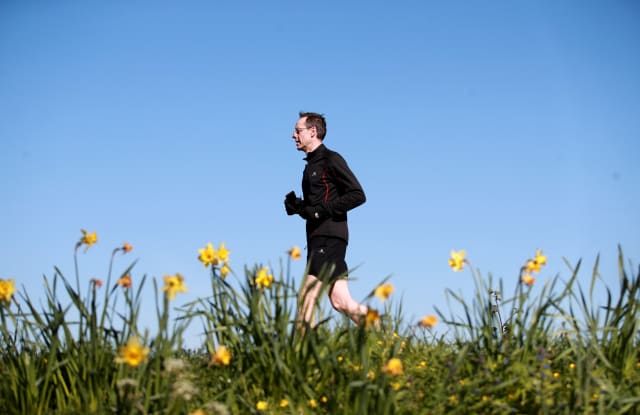 A new generation of wearable devices could be powered by human sweat instead of conventional batteries, scientists have said.

Engineers at the University of Glasgow have developed a new type of flexible supercapacitor, which stores energy, replacing the electrolytes found in conventional batteries with sweat.

It can be fully charged with as little as 20 microlitres of fluid and is robust enough to survive 4,000 cycles of the types of flexes and bends it might encounter in use.

The device works by coating polyester cellulose cloth in a thin layer of a polymer known as poly(3,4-ethylenedioxythiophene) polystyrene sulfonate – or PEDOT:PSS, which acts as the supercapacitor’s electrode.

As the cloth absorbs its wearer’s sweat, the positive and negative ions in the sweat interact with the polymer’s surface, creating an electrochemical reaction which generates energy.

The researchers tested the effectiveness of their technology by having volunteers run outdoors and on a treadmill while wearing a 2cm by 2cm cell version of the device.

The runner sweated enough to allow the device to generate about 10 milliwatts of power – about enough to power a small bank of LEDs – which kept it going until the runner stopped.

The research was led by Professor Ravinder Dahiya, head of the Bendable Electronics and Sensing Technologies (Best) group, based at the University of Glasgow’s James Watt School of Engineering.

He said: “Conventional batteries are cheaper and more plentiful than ever before but they are often built using unsustainable materials which are harmful to the environment.

“That makes them challenging to dispose of safely and potentially harmful in wearable devices, where a broken battery could spill toxic fluids on to skin.

“What we’ve been able to do for the first time is show that human sweat provides a real opportunity to do away with those toxic materials entirely, with excellent charging and discharging performance.

“As wearable devices like health monitors continue to increase in popularity, it opens up the possibility of a safer, more environmentally-friendly method of generating sustainable power – not just for wearables but possibly also for emerging areas such as e-bikes and electric vehicles, where sweat equivalent solution could replace the human sweat.”

The team chose the polyester cellulose cloth because it is particularly absorbent, and PEDOT:PSS because it offers a useful combination of flexibility, high conductivity and environmental friendliness.

Dr Libu Manjakkal of Best, who contributed to the paper, said: “It’s an exciting development and we’re keen to continue exploring the possibilities that sweat power provides for the future of wearable electronics.”

The research was funded by the Engineering and Physical Sciences Research Council (EPSRC) and the Royal Society.

Public urged to be vigilant over scam test and trace messages