Public should use common sense when meeting up outdoors – Raab 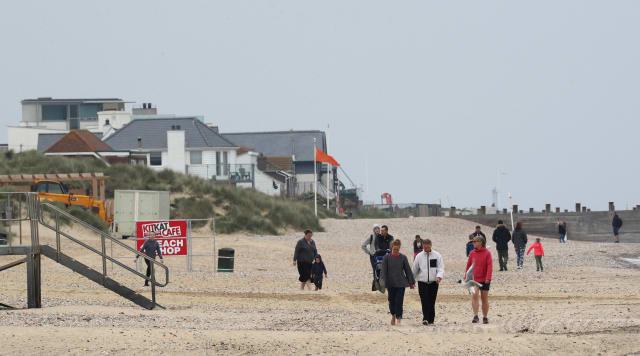 People should use “common sense” if they meet people from other households in the outdoors, Foreign Secretary Dominic Raab has said, as the Government comes under continued pressure over “a lack of clarity” in its messaging to the public.

Boris Johnson unveiled a “conditional plan” on Sunday evening for easing restrictions in England, saying people could take unlimited exercise outdoors, travel to other places by car and should start going back to work if they cannot work from home.

Primary schools could begin to reopen on June 1 starting with reception and years 1 and 6, he said, while parts of the hospitality sector such as pavement cafes and cafes in parks could open in July.

On Monday, Mr Raab appeared to add to the uncertainty by saying people should only go to work from Wednesday. He also said it was fine to meet two people from another household as long as the households kept two metres apart.

Government officials said on Sunday evening people should go back to work from Monday. They also said the new rules meant you could meet only one other person from another household outdoors.

He said: “If you’re out in the park and you’re two metres apart, we’re saying now, (if you) use some common sense and you socially distance, you can meet up with other people.”

Asked if someone could meet their mother in the morning and their father in the afternoon, he said: “Outside in the outdoors, staying two metres apart, yes.”

When asked later if someone could meet up with both their parents in a park, Mr Raab said: “Well, you could if there’s two metres apart.”

However, Mr Raab said people should not play group sports such as football with other households.

“Two people from the same home could go and play tennis, because that’s something where they could stay two metres apart from everyone else,” he said.

“So, football would be one of those where I think would be very difficult to stay two metres apart if you’re playing, you know, 11-a-side or even five-a-side.”

Mr Raab also said people could drive as far as they wanted to if there was an outdoor area they wished to visit.

He said: “You can drive as far as you want to drive to go and walk in a park or a particular area that you’re fond of as long as you maintain the social distancing.

Mr Raab also urged people to go back to work from Wednesday if they cannot work from home.

“If you can work from home, you should continue to do so, but there are nine sectors of the economy like manufacturing and construction, where people can’t do their job from home,” he said.

“So we’re saying to them they should now from Wednesday, go back to work.”

“He said ‘And the first step is a change of emphasis that we hope that people will act on this week.’

“Wednesday was only mentioned in relation to other changes. Words matter.

“Clarity is essential. This is shambolic.”

On the issue of schools, Mr Raab said schools would be given “clear guidance” about social distancing and hygiene, adding there was a “much lower risk for young children getting this virus.”

But Patrick Roach, general secretary of teaching union NASUWT, said the profession has “very serious concerns” about children returning to school on June 1, adding no clear plan had been put in place.

The Prime Minister is due to face MPs on Monday afternoon and will publish a 50-page document setting out further details of his “road map”.

He will give a statement to the Commons, with more information expected on a Covid-19 alert system, use of face coverings, and quarantine restrictions for travellers entering the UK.

The chairman of the British Medical Association (BMA), Dr Chaand Nagpaul, said the Government had created confusion in its messaging, adding that there was still “a considerable amount of community circulation of the virus going on”.

He added: “If we now allow the public to go to local parks in an unlimited sense, and to go outdoors… what we’ve not heard is how the Government will enforce social distancing and how it will avoid a whole neighbourhood playing in a park, with footballs moving from one group to another, and spreading the disease.

“So, I’m really concerned that there is no clarity.”