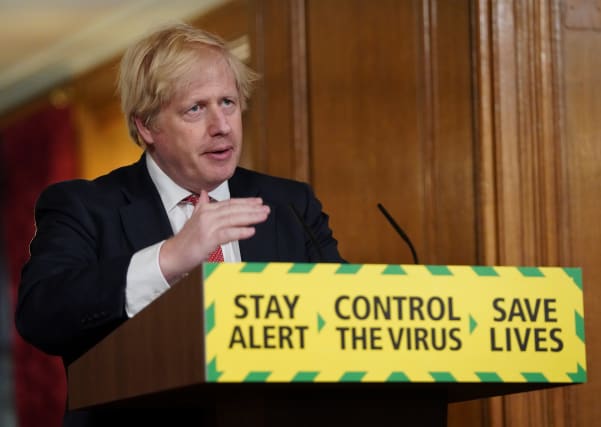 The Prime Minister has said he is “interested” to see that the French government has adopted a similar slogan to the new “stay alert” for its own next stage of coronavirus recovery.

In a tweet yesterday evening, the French President told people: “Thanks to you, the virus is receding.

“But it is still there.”

Over the weekend, the Government unveiled its own “stay alert, control the virus, save lives” message.

Speaking at the daily Downing Street press briefing, Boris Johnson said: “For those who think that the stay alert is not the right message, I think it is absolutely the right message for our country now.”

After quoting the new French slogan, he added: “Which is, as I’m sure everybody knows, roughly the same sort of thing as our message and I think it’s the right way to go.”

Some Twitter users criticised the Prime Minister for being out of touch in assuming viewers knew what he had said.

Mr Johnson was answering a question about people being confused by the change from the former “stay at home” advice.

He told the briefing: “Yes of course the message that we were giving out initially was incredibly clear and incredibly stark and the UK population actually obeyed it more thoroughly than many other populations around the world.

“We’ve now made so much progress in combating the disease and pushing the R down that we need to make progress, if we possibly can, in relaxing some of the measures very, very cautiously.”