Passengers must give quarantine address at border or face arranged accommodation 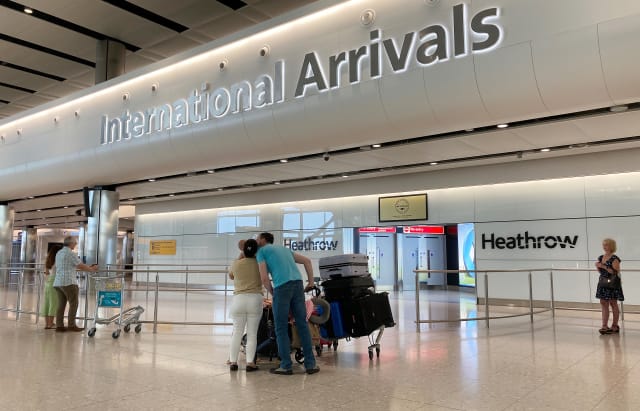 International travellers into the UK will have to tell border officials where they will self-isolate for 14 days or face quarantining in Government-arranged accommodation, new guidance has said.

Boris Johnson announced a 14-day quarantine for international air passengers during an address to the nation on Sunday evening.

Guidance released on Monday said all international arrivals not on a “short list” of exemptions will be required to self-isolate for 14 days in their accommodation.

They will be required to supply contact and accommodation information and will also be “strongly advised” to download and use the NHS contact-tracing app on their phones.

“Where international travellers are unable to demonstrate where they would self-isolate, they will be required to do so in accommodation arranged by the Government,” the document said.

There will also be increased information about the UK’s social distancing policies displayed at the border.

Some exemptions will be in place to provide “continued security of supply into the UK” as well as not impeding work in national security or critical infrastructure.

The document also said that all journeys within the common travel area – which covers the UK, Jersey, Guernsey, the Isle of Man and Ireland – will be exempt from the measures.

It added the Government was working closely with the devolved administrations in Wales, Scotland and Northern Ireland to co-ordinate the policy across the UK.

There will be some exemptions to the measures “to meet the UK’s international obligations”, the guidelines said.

Mr Johnson and French president Emmanuel Macron previously agreed that quarantine measures would not apply between France and the UK “at this stage”, according to a joint statement issued after the address.

The document said the quarantine was being introduced to “manage the risk” of new infections coming from abroad as social contact increases while the UK’s infection level decreases.

During the address on Sunday, Mr Johnson said it will “soon be the time” to bring in a quarantine period for air passengers to stave off Covid-19 infections from abroad.

It is unclear whether the guidance will apply to air passengers alone or if other forms of international transport will be covered.

Willie Walsh, chief executive of BA’s parent company, International Airlines Group, said there was “nothing positive” in the Prime Minister’s address and expressed his surprise.

Giving evidence to the Commons Transport Select Committee about the demand for air travel, Mr Walsh said: “The announcements yesterday of a 14-day period (for people) coming into the UK, it’s definitely going to make it worse.”

Unlike other measures announced on Monday, the self-isolation policy will not be put into place on Wednesday but will be introduced as soon as possible.

More details and guidance will be set out in the near future, and both the measures and exemptions will be regularly reviewed, the document also said.