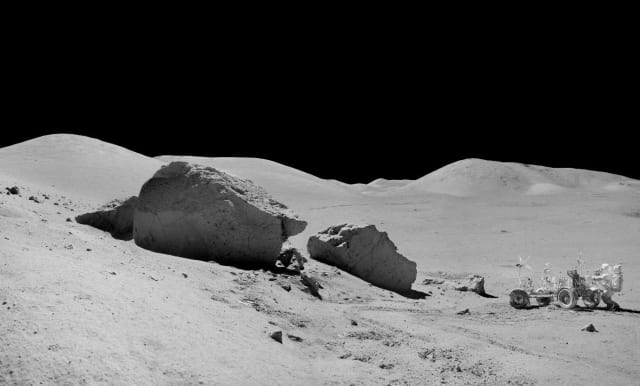 Large portions of the Moon’s crust was formed from massive impact events, according to new research.

The study, published in Nature Astronomy, overturns previous theories that colliding asteroids and comets were only a destructive process, with the lunar crust being created by magmas rising from the planet’s interior.

Having conducted new analysis of a sample collected by Nasa astronauts during the Apollo 17 mission in 1972, a group of scientists have found that the rock contains evidence that it was formed at incredibly high temperatures.

This would have reached in excess of 2,300C which the scientists say could have been achieved by the melting of the outer layer in a very large impact event.

Dr James Darling, of the University of Portsmouth, said: “The discovery reveals that unimaginably violent impact events helped to build the lunar crust, not only destroy it.

“Going forward, it is exciting that we now have laboratory tools to help us fully understand their effects on the terrestrial planets.”

The team used a technique called electron backscatter diffraction to discover the former presence of cubic zirconia, a mineral phase that would only occur in rocks heated to above 2300C.

Radiometric age dating of the grain at the Swedish Museum of Natural History also revealed that it formed more than 4.3 billion years ago.

Researchers from the universities of Portsmouth, Manchester and The Open University, were funded by the Science and Technology Facilities Council (STFC) for the study.