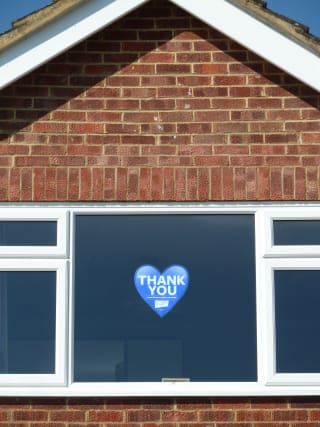 A man is campaigning for people to display blue hearts for the NHS in tribute to his “inspirational” wife Sally, who works as a nurse.

Andy Williams, from Guildford, is raising money for the NHS by asking people to display blue “thank you” hearts in their windows.

“After a long uncomfortable shift wearing PPE, Sally comes home exhausted but determined to do her bit… to come home from a shift and see entire rows of houses with a blue heart would be something special,” he said.

The campaign, Blue Hearts 4 Heroes, was thought up during the first national Clap For Carers event in March.

Sally Williams has been a nurse for 15 years, and since the pandemic has been deployed to a community hospital treating patients with Covid-19.

“She’s an absolute inspiration,” Mr Williams said. “I thought it would be great if people could buy something to decorate their own home to show support, and to raise money for NHS Charities Together at the same time.

“There are 25 million houses in the UK, so if just 10% bought a heart, we could raise millions.”

The hearts, which raise money for NHS Charities Together, can be bought here: www.bluehearts4heroes.co.uk