London boroughs to collaborate on project to feed the vulnerable 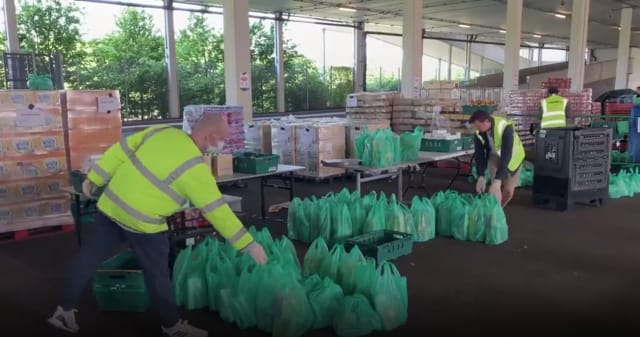 A new project involving all 32 London boroughs will see food hubs across the capital come together to feed vulnerable residents.

The collaboration between the city’s three largest food redistribution charities, The Felix Project, FareShare and City Harvest, will work to stock hubs before being distributed to local communities.

The project has been set up amid the ongoing coronavirus crisis which has seen many at risk individuals isolated and in need.

It comes as the Independent Food Aid Network (IFAN) said that food banks operating across the UK have seen a major rise in emergency food parcel distribution since the onset of the crisis.

Almost a third of organisations experienced rises of 100% or more comparing figures for the months of March 2019 and 2020, with 7% having seen a rise of 300% or more, according to IFAN figures.

Authorities say that more than 50,000 packages have already been to vulnerable Londoners and that responses have been made to 65,000 additional requests for food aid and financial support.

This amounts to 1,500 tonnes of nutritious food and is enough to provide over 3.5 million meals.

The project is staffed by teams of volunteers, who receive the food deliveries, package them into parcels and deliver them to individual doorsteps, local food banks, charities and community centres.

It is being co-ordinated by the Strategic Co-ordination Group (SCG), the body leading London’s response to the Covid-19 outbreak, alongside boroughs and the London Food Alliance.

Eleanor Kelly, deputy chairwoman of the SCG, said: “This crucial scheme shows the capital’s resilience as we pull together to look after the most at-risk in our communities.

“Each borough has worked tirelessly to get each hub up and running, and we owe a great deal to those volunteers who are ensuring everyone can access vital food supplies.”

Councillor Peter John OBE, chairman of London Councils, added that although the pandemic had brought many challenges, it had also “brought out the best” in many Londoners.