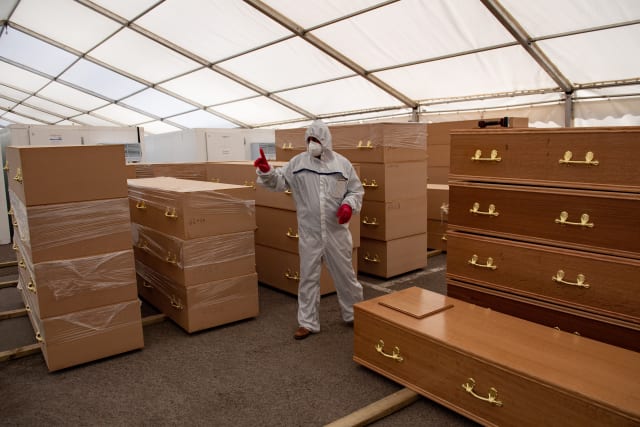 More than 20,000 “excess” deaths were counted in just one week since the end of March, the highest in two decades, funeral provider Dignity said on Monday.

The business revealed that overall deaths rose by just 2,000 in the first three months of the year, to 161,000.

Since the quarter ended, the rate has picked up, Dignity said.

However, the funeral provider warned against predictions that its business would reap a major windfall from the coronavirus crisis.

Firstly, if many more people die than the 600,000 predicted by the Office for National Statistics, it is possible there will be fewer deaths over the following two years.

“The group will not speculate on the most likely outcome,” Dignity said.

Secondly, as mourners are forced to keep away from funerals due to social distancing rules, most are now cutting back on all but the most essential services.

So far this quarter, 60% of clients are now choosing a simple funeral, as opposed to the full service. This compares with just 20% in the first quarter of the year.

It has meant that the average income per funeral, before ancillary revenues, has fallen to £2,200, compared with £2,648 in the previous three months.

“Covid-19 is presenting a unique set of challenges for the UK as a whole and for Dignity,” said executive chairman Clive Whiley.

He paid tribute to the company’s staff as “an easily forgotten subset of key workers who all deserve our thanks.”

No-one who works for the company has been furloughed, and Dignity will not ask the Government for any direct financial support, apart from business rates relief.

“The various government schemes designed to protect jobs and people’s livelihoods are intended for small businesses and sectors that are under threat more directly than Dignity,” Mr Whiley said.

Dignity said its underlying operating profit fell 11% to £19.4 million on revenue of £83.1 million in the first quarter.

Dignity has a trust to safeguard the money that customers pay to take care of their funeral expenses. It revealed that this pre-pay trust’s assets have a 6% deficit due to the global market downturn.

Mr Whiley added: “We continue to progress the strategic review of the business, initiated upon my appointment in September 2019, which is designed to position the group for all eventualities.”