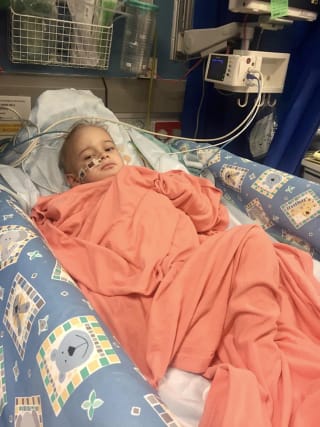 A footballer who ran 140 miles in 14 days live on Instagram to raise money for a four-year-old boy says he will not stop until Liam Scott gets the cancer vaccine he needs.

Former Dagenham and Redbridge player Charlie Holmes completed the marathon effort on Sunday but knows more money is needed to send Liam to New York for a potentially life-changing treatment.

Paw Patrol fanatic Liam is coming to the end of a year of painful treatment for neuroblastoma – a very rare cancer – but there are fears it could return.

An experimental vaccine could stop the life-threatening disease coming back, but it is only available in the US and his family need to raise £232,000.

The coronavirus pandemic means that races and other fundraising activities the family had planned have been cancelled, leaving them worried they will not be able to raise the full amount.

Mr Holmes, who had never met Liam before hearing about his struggles, has raised nearly £30,000 by running 10 miles a day for the last 14 days.

Liam’s family, who live in Sevenoaks, Kent, have also raised around £107,000 – leaving £95,000 still needed to pay for the treatment that could save Liam’s life.

Speaking to the PA news agency after finishing his 140-mile challenge, 21-year-old Mr Holmes said getting Liam the full money would “just mean to the world”.

“I had really low points where I was really tired and I thought I am nowhere near the money but seeing people’s comments all saying ‘you are doing really well, you are doing an amazing thing’ it really helped.

“I literally can’t express how grateful I am for everything that everyone’s done. It has been absolutely amazing.”

But he knows Liam’s family still need to raise more funds and is determined to get him to New York.

He said: “I need people to keep sharing, keep donating. I am not going to stop now.

“It’s literally one more little push and I think that we would make the money, really, and that would be a dream come true.”

He said a celebrity taking up the cause on social media could make all the difference.

He pointed to the huge amount of funds raised by a similar campaign after Love Island star Shaughna Phillips shared it on Instagram.

In an effort to bring Liam some extra joy, Mr Holmes and his younger brother dressed up in Paw Patrol outfits and paid him a socially distanced visit.

“I just want that day to come when his mum calls us and says ‘by the way Liam has just had his vaccine in America’,” he said.

Mr Holmes’ fundraiser can be accessed at https://www.justgiving.com/crowdfunding/charlie-holmes-thisisforyouliam, while the family’s can be found at https://www.solvingkidscancer.org.uk/Appeal/liam