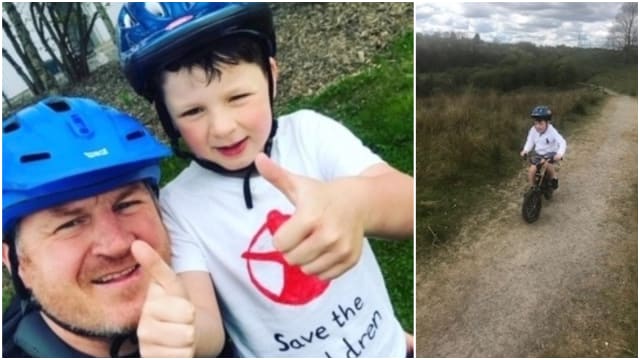 A five-year-old Bradley Wiggins fan has raised more than £1,000 for charity by cycling 26 miles over a week.

Jacob Cree from Carnbroe in Coatbridge, North Lanarkshire, said he “wanted to do something to help children my own age who are struggling due to the coronavirus”.

At the end of his final day, having cycled just under four miles each day, neighbours in his street came out to congratulate him on his feat.

The youngster only learned to ride his bike last year but told his parents he wanted to do the ride after his primary school asked pupils to take part in the 2.6 Challenge.

His father Joseph said: “His mum and I originally thought this would be a bit much for him as he is only five but he can be very persuasive.

“We planned a 26-mile route, dividing it up into just under four miles per day, and set off.”

He added: “Jacob has been obsessed with his bike since he learnt to ride it without stabilisers last year.

“He loves watching the Tour de France – Bradley Wiggins is one of his heroes.

“Our whole community came out on to the street to cheer him over the finish line. We are all very proud of him.”

The money raised by Jacob has been donated to Save The Children.

Mr Cree said: “He picked Save the Children as the charity as he wanted to help kids his own age.

“He was determined to use this time in lockdown to help others and even made his own Save the Children T-shirt with his mum.”

She said: “Children fighting for other children is what our organisation is all about.

“Jacob’s compassion for other children at such a young age is exactly the kind of determination and empathy we all need during this challenging time.”

She added: “Even before the coronavirus outbreak, four million children lived in poverty in the UK and we can’t let this number rise.

“We have launched an emergency appeal to raise money for our work helping children survive both here in the UK and around the world.

“It is acts of generosity like Jacob’s that make this work possible. Together, we’ll help families through this.”