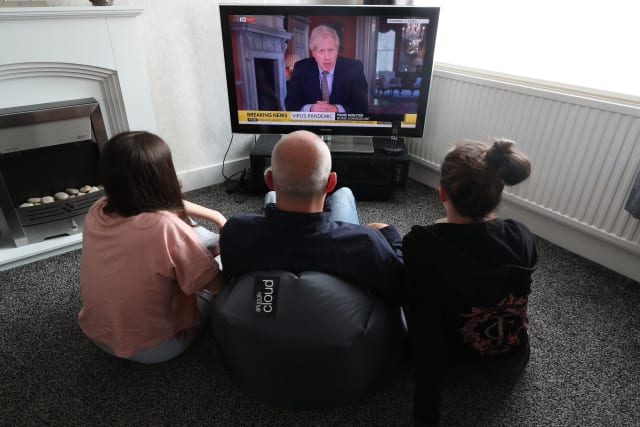 Union leaders have attacked the Prime Minister’s speech about easing the lcokdown, accusing him of sending mixed messages which could have “lethal” consequences.

Unions have been urging the Government for weeks to make sure workplaces are safe, with plenty of personal protective equipment (PPE), before the lockdown is eased.

John Philips, acting general secretary of the GMB, said: “More mixed messages from the Government – saying there’s no end to lockdown, but asking everyone to go back to work.

“If ministers want the economy moving again, we need strict rules on hygiene and social distancing, enough PPE for everyone, and regulations employers can’t just ignore if they fancy it.

“The overall message is contradictory and confusing, when what people really need is clarity.”

The Rail, Maritime and Transport union (RMT) advised its members not to work if they felt unsafe, saying the Government was shifting away from the stay at home message, which would unleash a surge in passengers on the railways and Tubes from tomorrow, breaching social- distancing measures with “potentially lethal consequences” for staff and the public.

Dave Ward, general secretary of the Communication Workers Union, said the new “stay alert” slogan was meaningless rhetoric, adding: “Tonight the Prime Minister told millions of people they can immediately return to work – with 12 hours notice for many, telling them they can’t use public transport and with no assurances on whether PPE, social distancing and other safety measures will be in place.

Manuel Cortes, Transport Salaried Staffs Association general secretary, said the “mixed messaging” from the Prime Minister was “dangerous”, adding: “By comparison, the clarity from Scotland and Wales is somewhat of a relief.

“The PM telling people who can’t work from home to go to work but not use public transport is a ridiculous notion by someone who appears to have lost all grasp of reality. It will cause chaos. Our transport network is not ready for any increase in passengers.

“We won’t allow our members to be used as Covid-19 cannon fodder so that Tory donors in the building industry can make a quick buck at their expense and that of our key worker heroes who need safe access to our public transport network to keep people alive.”

Mick Whelan, leader of the train drivers’ union Aslef, said: “The message around unlimited exercise, and the self-policing of it, will make it impossible to differentiate between those travelling as key workers, and in those areas where return to work has been encouraged, and those who are not.”

Unison general secretary Dave Prentis said: “The return to work must be safe. There must be no cutting corners, no playing fast and loose with employees’ safety. The economy is important, but lives are too.

“Many health, care and other key workers use trains, buses and tubes to get to work. Their safety must not be compromised by crowded public transport.

“The Government must ensure the NHS and the care sector have guaranteed supplies of protective equipment and there’s a comprehensive test, track and trace programme in place before any mass return to work.”