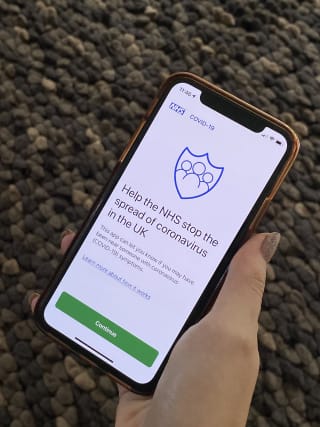 Concerns have been raised about the Government’s Covid-19 contact-tracing app’s reliance on self-reporting and the risk it could be used to “prank” people.

The smartphone download known as NHSX – which alerts mobile phone users if they have come into contact with someone with Covid-19 symptoms – is being trialled on the Isle of Wight before its anticipated roll-out across the rest of the country, but even the location of the trial has been called into question.

Dr Michael Veale, lecturer in digital rights and regulation at University College London, said the app’s reliance on people self-reporting is “a worry”, as well as its inability to work well across borders.

He said the UK is effectively the only country to use self-reporting, rather than verified tests, in its app.

Dr Veale, who is part of a team working on a rival app, told Sky’s Sophy Ridge On Sunday: “That appears to stem from, not a lack of number of tests potentially, but really something that hasn’t been focused on enough – the tests aren’t fast enough in the UK compared to other countries.

“And so the UK seems to claim it’s stuck using self-reporting because it can’t get a test turned around within a few hours.

“And this is really a worry. In other countries we’re working with, they are very clear that self-reporting will not be allowed on their app because it can be misused or used to prank or used to target people deliberately and put them into quarantine without them knowing.”

He said his team is developing a system for Germany, Switzerland, Austria and many other European countries.

Asked if he thinks the Government will end up using a second contact-tracing app, Dr Veale said: “There are real signs that they might, particularly because the UK is a clear outlier internationally in using this particular type of approach, and that means it won’t work well across borders.

“The Republic of Ireland have already said they’re using a decentralised approach, and that will potentially create problems there if the devolved administration chooses to effectively put in this kind of app.”

Dr Veale said it is “unclear” if the Isle of Wight is a good testing environment for the app.

“One of the challenges is the app needs to be tested in realistic situations, busy situations.

“And if the Isle of Wight is in lockdown as it is, it’s unclear that that is a good testing environment to see if the app really works and particularly around issues like battery when there are a lot of people around,” he said.

Communities Secretary Robert Jenrick denied the Government was already working on a second coronavirus app, but said ministers would move to a different app if necessary.

“As far as I’m aware we’re not developing a second app but we are paying attention to the other apps that exist elsewhere in the world,” he told the BBC’s Andrew Marr Show.

“And if we need to adapt our app or move to a different model, obviously we will do.”

Meanwhile, a diagnostic expert asked to consult on the Government’s app has criticised it for focusing on coughs and fever at the exclusion of other symptoms.

Nick Summerton, a GP with 32 years’ experience, told the Sunday Mirror the app risked ignoring 10 symptoms other than fever or cough.

“We have to get these fundamentals right. It is basic public health,” he said.

Dr Summerton said Public Health England had asked for his input on the app during its development.

He said: “The first point I made was include many more symptoms. The second was they should talk to Tim Spector about symptom clustering work he has done. To ignore such good work is strange.”

Professor Spector of King’s College London launched the Covid-19 Symptom Tracker app on March 23, with some three million people using it in Britain and the US since.

He said the Government, however, had refused to work with his team.

“The Government is putting politics above science,” he told the Mirror.

“We should be using a combination of symptoms to diagnose this. It would save lives. We are falling behind other countries.”

NHSX requires smartphone users to download the app and share data the moment they test positive or display signs of Covid-19, with the app sending a notification to all mobile phone users in recent proximity to them advising them to self-isolate.