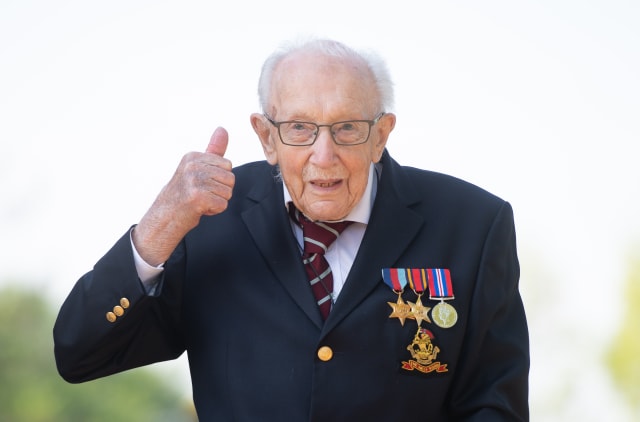 Captain Tom Moore is to be honoured with the Freedom of the City of London in a ceremony that will take place virtually for the first time.

The 100-year-old Second World War veteran, who raised nearly £33 million for the NHS, is set to tune to be honoured in an ancient tradition which is believed to date back to 1237.

He said: “I am deeply honoured to be granted the Freedom of the City of London.

“I remain humbled by the love and gratitude that I have received from the British public, and this honour is something that I will truly value for the rest of my life.”

He captured the hearts of a nation by setting off on April 6 to complete 100 laps of his garden to raise £1,000 for NHS Charities Together, which supports staff and volunteers caring for Covid-19 patients.

A groundswell of international support had seen his JustGiving fundraising page close at £32,796,405 on his 100th birthday on April 30.

He is now set to receive his honour in recognition of his outstanding charitable work at a ceremony which is to be livestreamed on the City of London Corporation’s YouTube channel on Tuesday.

The veteran, who served in the Yorkshire Regiment and fought in Burma, is in lockdown in Marston Moretaine, Bedfordshire, with members of his family.

The Lord Mayor said: “My colleagues and I were touched greatly by Captain Moore’s inspirational efforts to support the NHS and impressed by his remarkable achievement, his commitment to this cause, and the sheer generosity of his supporters.”

Dr Peter Kane,  the Chamberlain of London, said: “It will be my privilege to conduct Captain Tom Moore’s ceremony, mindful that this extraordinary gentleman will now be making headlines in the City of London for taking part in our first ‘virtual’ ceremony.”