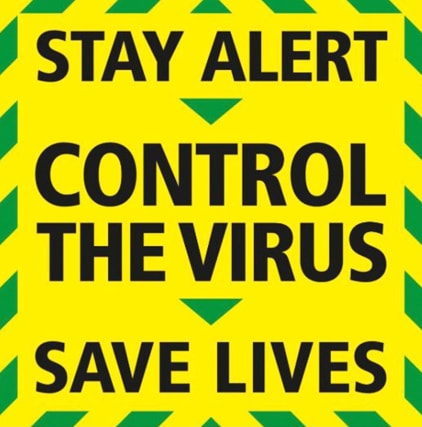 Boris Johnson’s new “stay alert” slogan to tackle coronavirus has been widely criticised, with one union leader labelling it a ‘joke’ and Scotland’s First Minister saying she would be sticking with the current “stay home” message.

After the bluntness of the shutdown message “stay at home, save lives, protect the NHS”, Britons are now to be asked to “stay alert, control the virus, save lives”.

Communities Secretary Robert Jenrick said a “broader” slogan was needed as the Government tries to restart the economy.

“I think that’s what the public want and that they will be able to understand this message, which is that we should be staying home as much as possible but when we do go to work and go about our business we need to remain vigilant, we need to stay alert.”

Asked on Sky’s Sophy Ridge On Sunday if there was a danger the message was too woolly, Mr Jenrick said: “Well I hope not.

“We need to have a broader message because we want to slowly and cautiously restart the economy and the country.”

But Scotland’s First Minister Nicola Sturgeon said she would not be ditching the current “stay home” message.

“The Sunday papers is the first I’ve seen of the PM’s new slogan.

“It is of course for him to decide what’s most appropriate for England, but given the critical point we are at in tackling the virus, #StayHomeSaveLives remains my clear message to Scotland at this stage.”

Shadow health secretary Jonathan Ashworth said: “I think the problem with the slogan that has been briefed to some newspapers is that people will looking at it slightly puzzled, questioning what does it mean to stay alert and what are the government saying with that.”

He also criticised selective briefings about the new message ahead of the Prime Minister’s address to the nation on Sunday evening, saying it had confused the public.

“I think some of those briefings to newspapers has led to the situation yesterday and on Friday of lots of people going to parks, enjoying the sunshine.”

Andy Burnham, the Labour Mayor of Greater Manchester, tweeted that it “feels to me like a mistake to me to drop the clear” stay at home message.

Dave Ward, general secretary of the Communication Workers Union, said: “The messaging from this Government throughout this crisis has been a total joke, but their new slogan takes it to a new level.”

He wondered: “Stay alert? It’s a deadly virus not a zebra crossing.”

Comedian and former junior doctor Adam Kay joked that it would be “difficult to stay alert to something that’s 0.0001 millimetres in diameter. This pandemic is going to have as many spikes as a coronavirus”.

Junior doctor Julia Simons tweeted: “Please can someone tell Boris coronavirus is not a physical assailant? You can’t stay alert to single-stranded RNA.”

But there was praise for the new message from the Bruges Group think tank.

In a since-deleted tweet, it stated: “The Government’s new slogan is good. Green replaces red for a calmer feel. ‘Stay Alert’ replaces ‘Stay Home’ and underlines individual responsibility. ‘Control the Virus’ is a positive message. It’s within our power to achieve.”