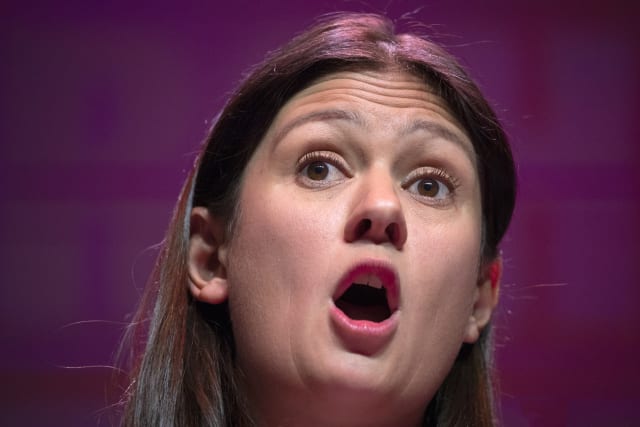 Dominic Raab and the Foreign Office have been accused by the shadow foreign secretary of “unforgivable failings” over their response to the death of Harry Dunn.

Harry’s parents Charlotte Charles and Tim Dunn said they felt “uplifted” after a virtual meeting with Lisa Nandy and hoped she would “take things forward on our and the nation’s behalf”.

And the shadow foreign secretary responded swiftly, writing in The Mail on Sunday that the meeting with Harry’s family “was a moment I will never forget”.

Ms Nandy said the parents’ campaign “has already highlighted a string of unforgivable failings by a Government they rightly believed should have been there to support them”.

She added that she was”deeply troubled by leaked communications reported by the Mail on Sunday in recent weeks that cast serious doubt on the accuracy of the Government’s own timeline of events”.

She added: “The Foreign Secretary’s account of how the person later charged with causing Harry’s death was able to leave the country, even while the police and the Crown Prosecution Service were pursuing prosecution, just does not add up.”

Harry, 19, was killed when his motorbike crashed into a car outside a US military base in Northamptonshire on August 27 last year.

His alleged killer, 42-year-old Anne Sacoolas, the wife of a US intelligence official, claimed diplomatic immunity following the crash outside RAF Croughton and was able to return to her home country, sparking an international controversy.

She was charged with causing the teenager’s death by dangerous driving in December but an extradition request submitted by the Home Office was rejected by US Secretary of State Mike Pompeo in January.

Ms Nandy said: “Left with little option, Harry’s family has turned to the courts for help. While the Government is straining every sinew to defeat them, there is still the hope that a judgment next month will finally force ministers to be honest about the mistakes that were made and start to set this right.”

The PA news agency understands that Ms Nandy raised the case with the UK ambassador to the US, Karen Pierce, shortly after meeting Mrs Charles and Mr Dunn.

The family’s spokesman, Radd Seiger, said the shadow foreign secretary told the parents she would discuss the next steps with chairman of the Foreign Affairs Committee Tom Tugendhat, chairwoman of the Home Affairs Committee Yvette Cooper and shadow attorney general Charlie Falconer.

Speaking after their meeting, Mrs Charles and Mr Dunn said: “Lisa was really lovely and amazing with us.

“She allowed us the space and time to tell her how we are feeling and how unfair it all is.

“To lose our son was bad enough but to be abandoned and mistreated the way we have been by the British Government, who were clearly trying to sweep us under the carpet, is inhumane.

“We will not let another family go through what we have been through.

Addressing what was discussed in the meeting, Mr Seiger told PA: “During our meeting we urged Lisa Nandy to help get justice for Harry and she discussed a number of avenues open to her as shadow foreign secretary.

“The Foreign Office’s handling of the Anne Sacoolas affair and their subsequent mistreatment of the family has been a national disgrace and scandalous and will have to come under close scrutiny.

“Lessons must be learned and those in authority will be held to account.”