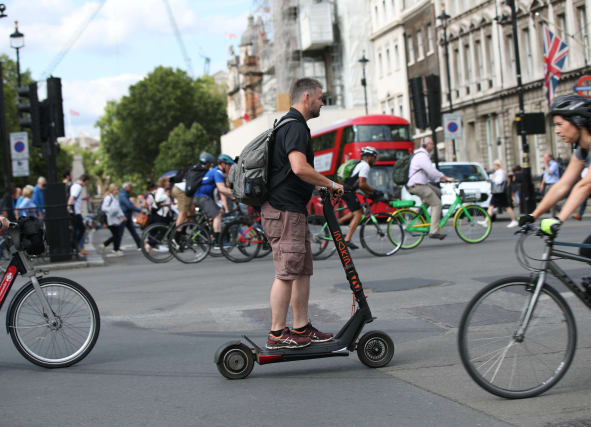 More walking, cycling and even e-scooters could be part of a new normal as it was revealed that social distancing would see just one in 10 passengers able to travel if the transport network was running at full capacity.

In order to keep to the rules of people staying two metres apart, the network would only be able to safely cater for 10% of people, Transport Secretary Grant Shapps said.

Pop-up bike lanes, wider pavements and cycle and bus-only streets are among the plans for England as the public is urged to make changes to their travel habits when elements of the lockdown are eased.

Mr Shapps warned it is everyone’s responsibility not to overcrowd the network, something he said could lead to a second spike and more coronavirus deaths.

At the Downing Street briefing on Saturday, he said: “Preventing overcrowding, which could lead to a second spike and more deaths, will be the responsibility of each and every one of us.

“So please, only travel when you need to, be considerate to others, and help prioritise essential workers.

“Let’s all play our part in ensuring that we’re able to get Britain moving safely again, when that time comes.”

As part of its plans, the Department for Transport is bringing e-scooter trials forward from next year to next month.

Trials, originally intended for four local authorities, are being extended to “every region in the country who wants them”, Mr Shapps said, and the rental vehicles could be on UK roads by June.

He said better air quality has been one of the few benefits of the current crisis and that fast-tracking e-scooter trials could be a way to try and preserve that gain.

The department said the Government will help local authorities across the country to boost provision for cyclists, including in Greater Manchester, which wants to create 150 miles of protected cycle tracks, and Transport for London, which is planning a “bike Tube” network above Underground lines.

Fast-tracked guidance published on Saturday tells councils they must reallocate road space for significantly increased numbers of cyclists and pedestrians, the department said.

In a bid to encourage people to dust off their old bikes, vouchers will be given out for cycle repairs and the department also said plans are under way for greater provision of bike-fixing facilities.

Mr Shapps also announced £10 million of additional support for car-charging points on the streets, in light of the growing popularity of electric vehicles and in an effort to “keep this quiet clean car revolution going”.

The £2 billion investment mentioned by Mr Shapps is part of a £5 billion funding announced for cycling and buses in February.

The Local Government Association welcomed the announcements but said local councils must have “long-term certainty” around funding.

“Local control over infrastructure and public transport budgets would enable them to deliver the widespread improvements to promote more active travel.”

Mayor of London Sadiq Khan said funding for walking and cycling schemes is important for people who have to return to work.

He said: “I am determined that clean, green and sustainable travel must be at the heart of London’s recovery from Covid-19, so I am very pleased that the Government has announced significant funding for walking and cycling schemes.

“Everyone who can work from home must continue to do so. For those who must travel to work, and with social distancing likely to be in place for some time to come, enabling more people to walk and cycle will be critical to easing the pressure on our busy public transport network.”

What do the latest figures tell us about UK Covid-19 deaths?