What the papers say- May 9 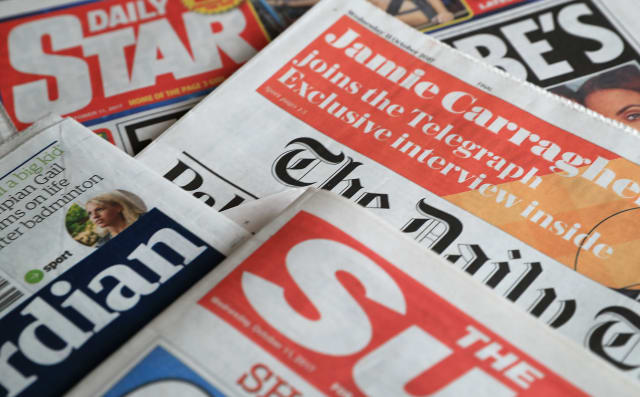 The Queen’s VE Day tribute leads most of the nation’s front pages.

The Daily Mail, Daily Mirror, and Daily Express all lead with the Queen’s message that “Second World War heroes would admire the nation’s response to the pandemic”.

The Sun dedicates a full front-page tribute to the 75th anniversary of the end of the Second World War in Europe.

The Daily Telegraph says the occasion sent a “message of stoicism and hope for a time of adversity”, while the i weekend leads with the Queen’s reminder to “Never give up. Never despair” in the face of the pandemic.

Elsewhere, The Times reports that Boris Johnson is set to announce all travellers to the UK will be “quarantined fora fortnight” in a bid to avoid the coronavirus reaching a second peak.

Education unions have called on the Government to implement a “stringent” coronavirus testing and contact tracing regime before schools are allowed to reopen, according to The Guardian.

The FT Weekend leads with the jobless rate in the US reaching 14.7%, as well as billionaire Richard Branson becoming “free to sell up to half his stake” in Virgin Galactic in order to “inject more capital” into the struggling airline Virgin Atlantic.

The Independent says 260,000 people are currently experiencing delays on their sickness and disability benefits as Government “staff are diverted by the pandemic”.

And the Daily Star leads with the wife of Celebrity SAS: Who Dares Wins star Ant Middleton crashing his £200,000 Lamborghini.