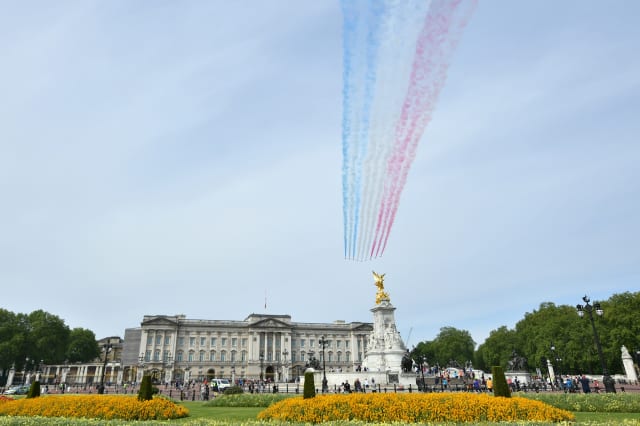 The UK has fallen silent to mark the 75th anniversary of VE Day as the country was urged to draw on the “same spirit of national endeavour” during the coronavirus crisis.

Millions across the country paused at 11am on Friday to remember those who served in the Second World War, and the price so many paid for freedom.

The poignant moment was led by the Prince of Wales and the Duchess of Cornwall, who each laid a wreath at a memorial near Balmoral.

Veterans and members of the public, unable to gather by their local war memorials as normal, quietly reflected in their own homes.

Friday marks 75 years since the formal acceptance by the Allies of Nazi Germany’s surrender.

And while the Covid-19 lockdown makes huge gatherings like those of 1945 impossible, commemorations are taking place at home and online across the UK.

The RAF staged flypasts across the country, with the Red Arrows soaring through the sky above Buckingham Palace and the London Eye and Typhoon fighter jets flying over Edinburgh, Cardiff and Belfast.

The anniversary will also be marked with wreath laying, virtual street parties and a national sing-a-long led by Dame Vera Lynn.

In a letter to veterans, the Prime Minister assured them that despite the ongoing lockdown, their efforts to defeat a “ruthless enemy” would not be forgotten.

Boris Johnson said: “On this anniversary, we are engaged in a new struggle against the coronavirus which demands the same spirit of national endeavour that you exemplified 75 years ago.

“We cannot pay our tribute with the parades and street celebrations we enjoyed in the past; your loved ones may be unable to visit in person,” he said in the letter.

“But please allow us, your proud compatriots, to be the first to offer our gratitude, our heartfelt thanks and our solemn pledge: you will always be remembered.”

General Sir Nick Carter, chief of the defence staff, told how long-planned ways to celebrate the anniversary had to be adapted due to coronavirus.

He told BBC Breakfast: “We will do what we can to commemorate it visibly.

“So I think we should spare a thought for them having to commemorate and celebrate at home.”

Later on Friday a Spitfire flypast is planned for a number of locations in the South East, including a veterans’ care home in Worthing, West Sussex and Queen Victoria Hospital in East Grinstead.

Captain Tom Moore, who raised more than £32 million for the NHS in April, will share his memories of wartime in an ITV documentary called Captain Tom’s War, which airs at 8pm.

In it he recalls having his spirits lifted by Dame Vera Lynn, whose songs include We’ll Meet Again and The White Cliffs Of Dover.

And recalling VE Day on Good Morning Britain, he said: “It was a very important day and everyone concerned was absolutely very pleased that this was the end … the bombing of London, the bombing of other cities … had come to an end.

His daughter Hannah said he would be marking the day with “quiet celebrations” at home.

At 9pm, the Queen will address the nation in a televised message – the exact moment her father, King George VI, gave a speech over the radio three-quarters of a century earlier.