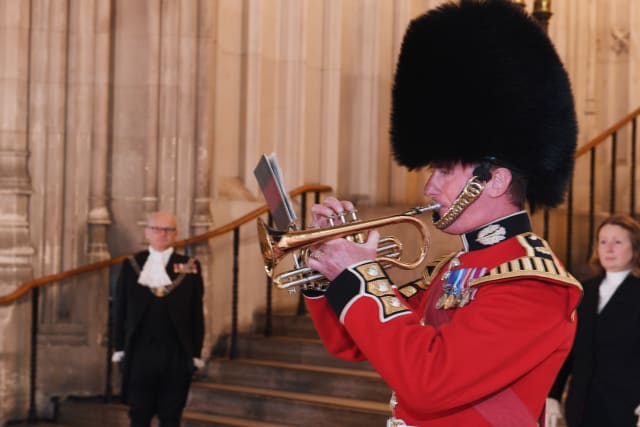 Trumpeters and buglers up and down the country played The Last Post to mark the 75th anniversary of VE Day.

The piece is often played at military memorials, and was taken up by dozens of musicians across the UK to mark the day that commemorates the end of the Second World War in Europe.

Among those involved was Paul Cartwright, from Ryhill near Wakefield, who plays with the West Yorkshire Police Band, which plays in Ypres every year on November 11.

The 48-year-old Church of England priest told the PA news agency: “It was to be able to honour those who gave their life for us, and also to honour those who are working so hard for us now in the armed forces, to help with all the Nightingale hospitals and all the logistics.

“It was to get the community involved and to give a bit of thanks for the peace that was brought on VE Day.”

Grace Harman, a 17-year-old A-level student from Kesgrave in Suffolk, said it was important to her to “pay homage to all the people who sacrificed”.

She told PA: “I knew today was going to be very poignant and a lot of people have been turning to music.”

Mr Cartwright said that by playing the same piece up and down the country, musicians can fulfil a unique role at a time when people are social distancing because of coronavirus.

“It’s a way musicians can try and unite the community at this strange time where so many people are isolated,” he said.

“It was interesting to see people stopping as they came by on their walks and just have a moment as they were listening to The Last Post. It was quite moving actually.”

Ms Harman agreed that the unique situation in the world added an extra layer of resonance to the music, calling it “especially poignant”.

She said: “It’s so still. For the trumpet, the part is quite challenging. When you master it and you get the notes perfectly, it really does it justice.”

Mr Cartwright added: “It’s a piece of music that grabs you and you get lost in the music. It’s beautiful.

“Because of what the music’s now used for, it’s a very, very special piece of music.”