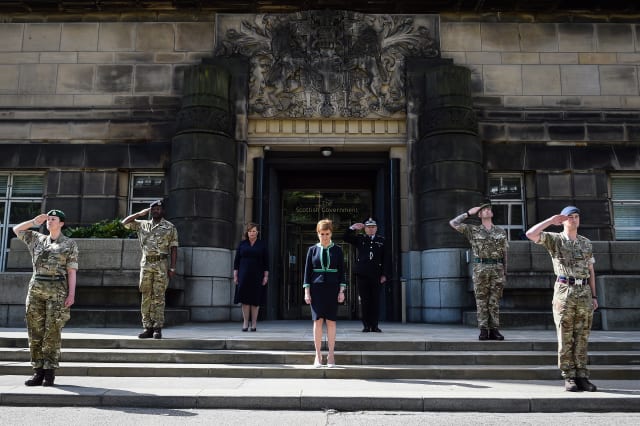 Speaking at the Scottish Government’s daily coronavirus briefing, the First Minister paid tribute to those who served during the war as the country commemorated 75 years since the surrender of Nazi Germany and the end of fighting in Europe.

Comparing the Second World War to the current pandemic, the First Minister said there is much to learn from those who fought and died, adding “we will overcome” the virus.

Ms Sturgeon said: “On this, the 75th anniversary of VE Day, Scotland remembers all those who lost their lives during the conflict.

“We think of all the men and women who served abroad and in doing so, we consider and give gratitude for the incredible legacy of our World War Two generation.”

She added: “The challenge they made then is very different to the one we face today – we are not fighting a war.

“But we should nonetheless draw strength and inspiration from their example.”

The First Minister said people living through the Second World War showed the “necessity and value of personal sacrifice”, “demonstrated the resilience of the human spirit” and “our ability to overcome adversity”.

Ms Sturgeon concluded by saying: “Our challenge may be different but just as they did then, we will overcome it.”

Commemorations planned by Legion Scotland, Poppyscotland and the Scottish Government were moved online due to the outbreak, with veterans minister Graeme Dey urging those planning on holding face-to-face services or celebrations to join in the virtual offerings instead.

Meanwhile, the Prince of Wales and Duchess of Cornwall led the country’s commemorations, laying a wreath near Balmoral on Friday morning.

The Duchess of Cornwall used her arrangement of spring flowers to pay tribute to her father, Major Bruce Shand, who served with the 12th Lancers during the war.

The First Minister’s comments came as Fife man Albert Gunn stressed the importance of younger generations learning about the war.

Albert, who was captured by the Germans when the plane he was in was shot down during a failed raid on Berlin in 1943, said: “I am glad that the younger generations are learning about the war and what my generation went through as there were a lot of difficult moments.”

The 95-year-old added: “VE Day meant all the sacrifices were over and a new future opened up which is what we all fought for.”