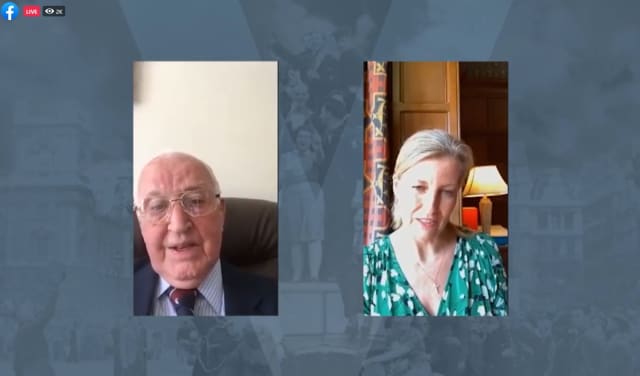 The Countess of Wessex joked with a Second World War airman about his hangover after VE Day celebrations when they met for a virtual chat.

Members of the royal family have been talking with wartime veterans and civilians this week to hear their stories and mark the 75th anniversary of the war ending in Europe.

Louis Goodwin, 94, from Salisbury, told the countess he joined the RAF in 1943 as an 18-year-old and opted to train as a gunner rather than pilot/navigator as the instruction course was shorter.

Speaking on the Royal British Legion’s special online show, screened on its Facebook page, the former airman said: “When I joined, I thought the war’s not going to last that long and I’ll never get flying, because the training for a pilot was a good year, so I elected to go for a quicker course on air gunnery.”

Sophie asked about his safety flying in Lancaster bombers, adding: “Quite an exposed position you were in because you were right down in the tail.”

Mr Goodwin joked: “I wasn’t quite as fat as I am now, with flying gear on it was a job to get in anyway – a little bit tight sitting behind four machine guns.”

When the veteran told the royal he left the VE Day party at 11pm, she said “quite civilised – not too bad” and he replied with understatement and a laugh: “We had a few drinks”.

“You remember the headache the next morning?” asked Sophie, and Mr Goodwin replied “Yes, yes and wondering what we were going to do next.”

During the Royal British Legion’s online show, Dame Joan Collins described how her London home was destroyed in an air raid when she was a child, and tenor Alfie Boe entertained those watching by singing.

Dame Joan said: “We got bombed out and I remember going to our home in Maida Vale and seeing that the whole flat was gone.

The Princess Royal chatted to 95-year-old Dorothy Pettican Runnicles, from Gloucester, who served with the Women’s Royal Naval Service as a petty officer air radio mechanic.

She told Anne she “volunteered for the services because it was the thing to do, we had to get this war finished”.

At the age of 19, Dorothy lost her boyfriend in an air crash while she was working in the Fleet Air Arm.

She said about her service: “It challenged me, it stretched me – I learned about death.”

Anne asked how she was coping with the coronavirus lockdown, and the 95-year-old told her: “I’m not good in my mobility and I worry (about) not getting out of the flat, but I’ve got instructions from my grandchildren, I’ve got to stamp about the flat from each room and pretend I’m doing physical work.”

The princess added with a laugh: “There are some actually quite good sitting down exercises, but I won’t bother you with those.”