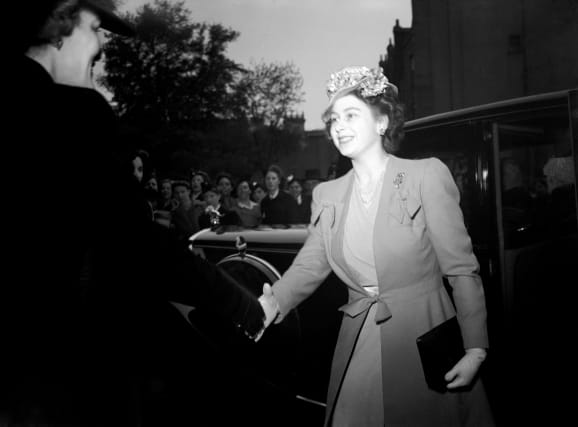 As the Queen spoke of the jubilant celebrations which “some of us experienced first-hand”, she was no doubt thinking back to her own VE Day adventures.

It was the subtlest of nods to when, as a 19-year-old princess, she danced in delight outside Buckingham Palace with thousands of other revellers on May 8 1945 after slipping into the crowds unnoticed with her 14-year-old sister Princess Margaret.

It was a moment she would later describe as “one of the most memorable nights of my life”, with “all of us just swept along on a tide of happiness and relief”.

But exactly three-quarters of a century on from VE Day, Elizabeth, now a 94-year-old Queen, was on duty as the nation’s longest-reigning monarch, focusing on the sacrifice made by those who died during the conflict.

In the merest hint at her celebratory escapades outside the palace walls, she said in her televised address: “As I now reflect on my father’s words, and the joyous celebrations, which some of us experienced first-hand, I am thankful for the strength and courage that the United Kingdom, the Commonwealth and all our allies displayed.”

She added: “I vividly remember the jubilant scenes my sister and I witnessed with our parents and Winston Churchill from the balcony of Buckingham Palace.

“The sense of joy in the crowds who gathered outside and across the country was profound.”

It was a rare taste of real life on an extraordinary day for the princesses when they hurried out on to the streets of London after dinner to join the crowds, accompanied by a group of Guards officers, who were friends of the princesses.

Margaret came up with the idea and the King and Queen agreed to the excursion, with the monarch writing in his diary of his daughters’ lack of social life: “Poor darlings, they have never had any fun yet.”

Under the cover of darkness, the royal teenagers moved around incognito in the mass of people.

They did the hokey cokey and the Lambeth Walk, sang Run Rabbit Run and Roll Out The Barrel, took part in chants of “We want the King” at the palace railings, and also danced the conga through the Ritz hotel in nearby Piccadilly.

As part of the official celebrations in 1945, King George VI and Queen Elizabeth made eight appearances on the palace balcony in 10 hours – on one occasion accompanied by prime minister Winston Churchill.

Elizabeth and Margaret themselves appeared six times with their parents throughout the day and evening.

Buckingham Palace earlier shared archive audio of the Queen’s thoughts on the experience, recorded in an interview for the BBC Radio 4 programme The Way We Were for the 40th anniversary on May 8 1985.

“We cheered the king and queen on the balcony and then walked miles through the streets,” the Queen said.

“I remember lines of unknown people linking arms and walking down Whitehall, all of us just swept along on a tide of happiness and relief.”

She revealed how they “cheated” to make sure their parents appeared on the balcony to their shouts of “We want the King.”

“We were successful in seeing my parents on the balcony, having cheated slightly because we sent a message into the house to say we were waiting outside,” the Queen said.

“I think it was one of the most memorable nights of my life.”

The Queen, who served in the Auxiliary Territorial Service in 1945 and was in uniform on the day, described how she was terrified of being recognised on the streets “so I pulled my uniform cap well down over my eyes”.

The same cap featured in the Queen’s televised address, placed on the desk in front of the monarch.

She recalled in 1985 how she was reprimanded by a fellow officer.

The Queen said: “A Grenadier officer amongst our party of about 16 people said he refused to be seen in the company of another officer improperly dressed, so I had to put my cap on normally.”