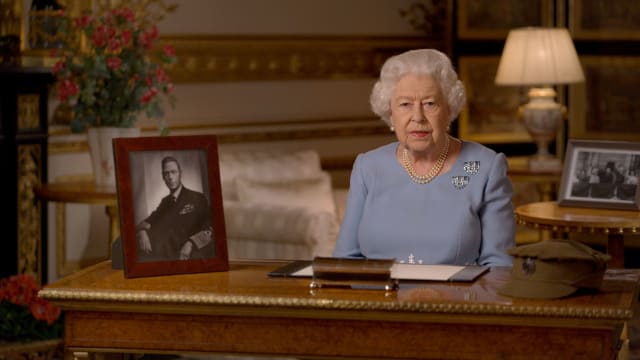 The Queen was surrounded by historic personal mementos from the war years as she addressed the nation on the 75th anniversary of VE Day.

Her aquamarine and diamond clip brooches were an 18th birthday present from her father King George VI in April 1944 – just over a year before the end of the conflict in Europe.

The two art deco-style pieces, which the Queen wore separately in a diagonal setting, were made by Boucheron from baguette, oval and round diamonds and aquamarines.

She also chose to wear the precious jewellery during her Diamond Jubilee televised speech in 2012 – her only other televised address marking an anniversary.

On the desk in front of the Queen was her Auxiliary Territorial Service (ATS) khaki-coloured peaked cap – part of her uniform when she undertook National Service in February 1945.

An 18-year-old Princess Elizabeth joined the ATS and registered as No. 230873 Second Subaltern Elizabeth Alexandra Mary Windsor and took a driving and vehicle maintenance course at Aldershot, qualifying as a driver.

It was this cap that the teenage princess pulled down to shield her face as she and her younger sister Princess Margaret and friends joined thousands of revellers unnoticed outside Buckingham Palace on VE Day.

Years later, the Queen described how she had been terrified of being recognised on the streets “so I pulled my uniform cap well down over my eyes”.

But she added she was reprimanded by a fellow officer.

“A Grenadier officer amongst our party of about 16 people said he refused to be seen in the company of another officer improperly dressed, so I had to put my cap on normally,” she said during an archive radio interview in 1985 shared by Buckingham Palace on Friday.

The hat formed part of an exhibition of the Queen’s fashion at Buckingham Palace in 2016.

Also on the desk in the white drawing room at Windsor Castle was a framed photo of her father George VI looking serious but composed in his Admiral of the Fleet uniform with RAF Wings.

The black and white picture was taken in 1943 in the midst of the conflict by the celebrated photographer Yousuf Karsh.

Elizabeth was also photographed by Karsh the same year.

The princess became Queen just seven years after the end of the war when her beloved father died in 1952.

Behind the monarch is a photo of the princess in uniform with her family as they took to the Buckingham Palace balcony on VE Day with prime minister Winston Churchill to wave to the crowds.

The Queen said in her address: “I vividly remember the jubilant scenes my sister and I witnessed with our parents and Winston Churchill from the balcony of Buckingham Palace.

“The sense of joy in the crowds who gathered outside and across the country was profound.”

The televised broadcast was pre-recorded at Windsor, where the Queen has been staying for her protection during the coronavirus pandemic.

It was where she retreated with her sister during the war to keep safe amid the bombing of London.

From the Berkshire castle, she made her first ever radio broadcast at the age of 14 in 1939, calling on the nation’s evacuated children to have courage.