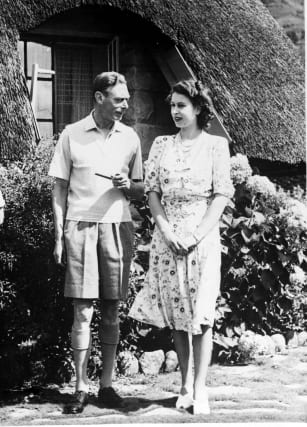 The Queen reflected on her father’s VE Day message in her own address which was broadcast at exactly the same moment three-quarters of a century later.

She described King George VI’s speech as a “salute to the men and women at home and abroad, who had sacrificed so much in pursuit of what he rightly called a ‘great deliverance’.”

Echoing a phrase used by her father, the Queen called the Second World War “a total war”.

She added: “At the start, the outlook seemed bleak, the end distant, the outcome uncertain but we kept faith that the cause was right – and this belief, as my father noted in his broadcast, carried us through.

“Never give up, never despair. That was the message of VE Day.”

The King’s radio message, broadcast at 9pm, called for lasting peace and urged the nation to use its resolve to deal with the tasks ahead, from the continuing conflict in the Far East to the challenges facing a war-ravaged Britain.

It began: “Today we give thanks to Almighty God for a great deliverance.”

The King added: “In the darkest hours we knew that the enslaved and isolated peoples of Europe looked to us; their hopes were our hopes; their confidence confirmed our faith.

“We knew that, if we failed, the last remaining barrier against a world-wide tyranny would have fallen in ruins. But we did not fail. We kept our faith with ourselves and with one another.”

“We have come to the end of our tribulation, and they are not with us at the moment of our rejoicing.”

The King on May 8 1945 also included a plea to keep children safe in the future, saying: “There is great comfort in the thought that the years of darkness and danger in which the children of our country have grown up are over and, please God, for ever.”

He asked people to “tomorrow take up our work again” in honour of those who died.

“We shall have failed, and the blood of our dearest will have flowed in vain, if the victory which they died to win does not lead to a lasting peace, founded on justice and established in good will,” he said.

“To that, then, let us turn our thoughts on this day of just triumph and proud sorrow; and tomorrow take up our work again, resolved as a people to do nothing unworthy of those who died for us and to make the world such a world as they would have desired, for their children and for ours.”